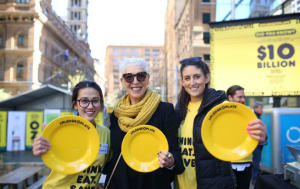 Since it launched in 2014 OzHarvest has garnered the support of big brands, including Woolworths, Virgin Mobile and Caltex, to become the biggest perishable food charity in Australia with 135 employees.

The organisation collects quality excess food from more than 2000 commercial outlets and delivers it direct and free of charge to more than 800 charities.

Marketing wise its latest campaign launched this week with creative agency, Lavender. It shows various food leftovers being turned into delicious meals in the format of Buzzfeed's successful Tasty videos.

OzHarvest recently teamed up with Uber to deliver icecream around the country. Celebrity chefs George Calombaris, Matt Moran and Neil Perry each designed a flavour for the day inspired by rescued ingredients.

Calombaris, who appears on Ten’s hit show MasterChef, is a big supporter of the charity, serving a free feast as part of OzHarvest’s Think.Eat.Save event earlier this year.

The Think.Eat.Save event runs annually in 11 cities. For its last event it teamed up with cloud-based payment system Kounta, which enabled it to “supercharge” the event and increase fundraising efforts by 293%.

The charity also just secured Woolworths as a major brand partner, after working with the retailer on smaller projects for ten 10 years. The supermarket giant now provides financial support to OzHarvest, donates food and provides volunteers for events.

Speaking to AdNews, CEO and founder Ronni Kahn says the decision to work with Uber came from an alignment of brand values.

“Uber is a disrupter business and I think they recognised what we did 12 years ago, which was disrupt the notion that surplus food was a waste product,” Kahn says. “We were disruptive before it became the most powerful word in the world.”

Kahn, who is speaking at the upcoming '9 to Thrive event for business chicks', says retail brands, such as Woolworths, Aldi and Sumo Salad, are becoming more aware of the huge amounts of food wastage they contribute to each year.

“Woolworths recognised it needed to ramp up its management of food,” she says. “It also wanted to align with a brand that embodied education.”

In 2014, OzHarvest launched its education program – Nutrition Education Sustenance Training (NEST). It aims to teach people in need across Australia the skills and knowledge to nurture themselves to healthier eating choices and food preparation behaviours.

“I think we have a compelling value proposition,” Kahn tells AdNews. “The more we can show we are doing means the more people and brands are willing to come on board.

“The corporates get to use the name of our brand and that is useful for their reputation and in turn, keeps us happy.”
Kahn previously spoke at an AANA event on finding and living purpose, which is how she has conducted herself and her business.

“If a business can’t find its business or purpose, it won’t survive,” she says. “It doesn’t make any sense to just be a business about money.

“When a brand takes on a bigger purpose than what it was originally built for, like we have, it provides a clear focus people can relate to.”

OzHarvest launched a digital campaign in July, which urges Australians to take action by making a personal pledge to change their eating behaviour and reduce food waste.

“This campaign was the brainchild of creative agency Give Art Science and would not have happened without their pro bono support, innovation, ideas and activation," Kahn says.

For previous campaigns OzHarvest has worked with communications and PR agency Liquid Ideas, who generously donate their services to the charity.

“We’ve been lucky enough to get commercials on TV stations, such as Seven and Ten, and in magazines. We use every form of media that is ever open to us, but we don’t spend on marketing – we piggy back,” Kahn says.

“I believe that charities should spend the money needed to make impact, but I don’t think you need spend millions of dollars.”

She believes OzHarvest has had so much sponsorship success because it is transparent with how much one donation can provide for someone and where funds are allocated.

“Transparency is absolutely crucial for charities,” she says. “There are 7000 charities out there and people have to choose where they spend their money.”