Our ads looked like 'vomit on a page', why Lenovo put faith in programmatic 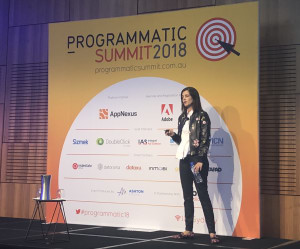 From print to billboards to TV and radio, programmatic is the future of the entire industry, says Lenovo’s head of digital APAC, Danielle Uskovic.

Its move to embrace programmatic has also seen it move from a haphazard or "vomit" style ad technique to a more targeted and consumer friendly strategy.

Speaking at Ashton Media Programmatic Summit in Sydney, Uskovic explained how she “fell in love” with programmatic back in 2012 and how people need to get with the programmatic programme rather that attacking the discipline.

“The innovation that is happening in this space in our industry is amazing,” Uskovic says.

“From print to billboard to radio and TV, it’s all going to be served programmatically – so it’s time to embrace it. It’s time to realise that this is the future.”

Uskovic explained Lenovo’s journey from dealing with more than 10 agencies to consolidating its digital ad supply chain and bringing it in-house. She said an agency can’t get as close to the business as needed as ultimately, it’s ‘you’ that really knows what the business needs are.

Uskovic said in 2012 when Lenovo started working with TubeMogul using video for branding. Then in 2014 it launched into the consumer market, from a primarily B2B environment. It used a number of different agencies and programmatic as its vehicle to achieve mass scale.

It wasn’t until 2015 that Uskovic realised that what she was doing was too complex and it was time to bring programmatic in-house.

She said the turning point was seeing far too many Lenovo adverts on one website which looked like “someone had just vomited on the page”, that she realised things had to change.

“I thought if that’s what a customer is experiencing that then that’s the worst experience ever,” she said.

Uskovic said having 10 agencies and looking at the digital supply chain back then was “enough to make you want to cry”.

“On any given day I felt like Gordon Ramsey in Hells Kitchen. It was a mess, it really was,” she said.

Uskovic said the hybrid model works best for them, using an agency, while investing and owing its own technology and infrastructure.

Did you see this from the conference? It's time to 'weed out the bad actors' in ad tech, says AppNexus chief