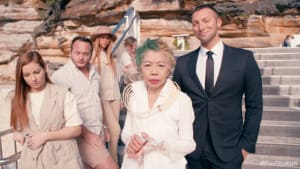 The AOC created the Inspiration Awards to recognise the contribution its partners bring to the Games through marketing initiatives at both the summer and winter Olympics.

The awards are presented to the brands who have achieved “extraordinary success” with the use of their Olympic partnership.

Optus was recognised for its “authentic and consistent message” of The Support Network across its advertising.

In July, Telstra was taken to court by the AOC for associating itself with the games, without any sponsorship. Telstra won the case.

“We are thrilled to have been selected for this award. It’s been a wonderful year, supporting the Australian Olympic and Paralympic Committee’s. It’s not every day we get to work on such prestigious properties as the Olympic Games,” Optus head of brand and communication Corin Dimopoulos says.

Swisse was awarded the Silver AOC Inspiration Award with a program that helped power Australians to achieve their dreams.

The campaign looked beyond just the results of the athletes to understand the challenges they face, as well as uncover the dedication and determination they possess to achieve their sporting dreams.

Woolworths was awarded the Bronze AOC Inspiration Award. The judges were impressed with the captivating idea of Grown in Australia, Picked for Rio which was carried across a number of platforms, as well as driving forward the AOC ‘Eat Like A Champ’ program, which promotes healthy eating to kids.

A ‘best social media’ category was introduced to this year’s awards and Swisse was the stand-out.

Swisse’s social media campaign featured an extensive production of content distributed across all platforms. Swisse’s daily video ‘The Rio Round-Up’ provided fans with top moments from the team each day of the games. The unique colour and celebrations that Rio brought to the games led to Swisse’s most popular digital and social media execution ever.

WPP AUNZ CEO John Steedman and judge on the panel commended the team sponsors for their marketing strategies.

“Regardless of company size, we saw some great ideas and creativity that transcend sport. It demonstrates the power and relevance of the Olympic Team to cut through and inspire consumers, customers and employees alike, he says.

“Our partners and suppliers’ promotion of the Olympic Team in the lead up to Rio and throughout the games was outstanding and amongst the best in the world. Our winter partners also excelled with their Sochi campaigns," Coates says.