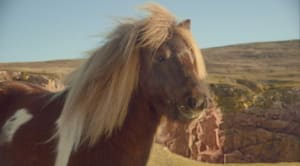 It’s little wonder that this dancing pony has become one of the most highly shared online videos this week; given that the content evokes a positive, high arousal emotional response from viewers.

Research led by Dr. Karen Nelson-Field at the Ehrenberg-Bass Institute has investigated 800 user generated and branded online videos that have been shared (at varying levels; some less than 10 times, others in the millions) and found strong links between sharing and positive, high arousal emotions. These findings have been found to hold across multiple studies.

For creatives and advertisers, the job then of creating video that is more likely to be widely shared becomes easier. Videos that elicit high arousal, positive responses from viewers; i.e. videos that makes us laugh out loud, are more likely to get shared.  Advertisers need to ensure early on that the video actually is inciting a high arousal positive response, not just a weak smile from viewers.

One rein that could have been tightened in this video is the branding.  It’s not until the last few seconds that the brand is shown.  Whilst some may say that online video doesn’t need such trivial concepts such as branding, the sharing of content alone is not enough; if viewers have no idea who the video is for Three is essentially no better off than before the video was created. Or it could be worse, viewers might misattribute this video to a competitor. The aim of advertising activity is for consumers to know what brand is advertising, otherwise why bother advertising at all?

Socially shared videos are of benefit to advertisers because they can essentially provide reduced cost reach.  The good news is that creatives and advertisers can produce dancing ponies until the cows come home; as long as the video is saddled with good branding and evokes positive, high arousal emotional responses from viewers; the arousing emotions incite sharing behaviour, the clear branding will get it remembered.