oOh!media Limited's half year profit was dragged down by weaker advertising on roadside billboards.

Chief Executive Officer Brendon Cook says performance was impacted by subdued trading during the May federal election and a softer economic environment.

"This negatively affected the performance of Road in particular," he says.

Advertising revenue from big roadside billboards fell of 9% in the first half.

This format, usually driven by big brand based advertising, was adversely affected by soft media spend and the cautious marketing behaviour of major advertisers during the federal election.

The company has cut its earnings guidance for the rest of the year.

“While the recent adjustment to our earnings forecast for the year due to current market conditions is disappointing, the Company tested a number of potential scenarios for future trading and we concluded no equity raising is required, excluding the dividend reinvestment plan” says Cook.

He says market commentary by media houses and industry reports indicate sluggish major advertiser confidence across the board.

He says bookings are strengthening in September after weak July and August, with a positive outlook for the fourth quarter, tracking up 6% on same time last year. 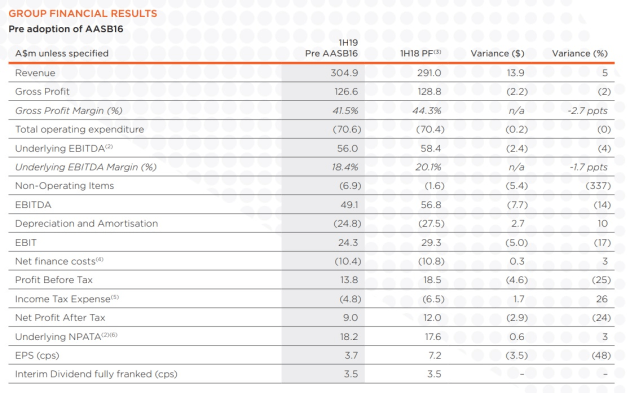