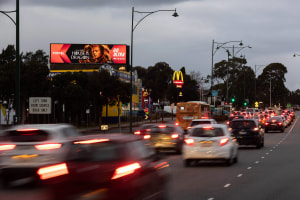 oOh!media has expanded its network in Melbourne and Geelong by adding four large format digitals to its portfolio.

oOh! has built a new double-sided supersite in Nunawading, further bolstering coverage in the eastern suburbs of Melbourne.

On the corner of Springvale and Whitehorse roads, the recently launched sites impact two key arterials and complement oOh!’s existing coverage throughout the east, in Box Hill and Ringwood.

Further extending its digital presence in Victoria, oOh! is digitising existing supersites in Lara, north-east of Geelong, key locations due to the accelerated urban sprawl between Geelong and Melbourne.

On the Princes Highway in an area with scarce inventory, the new digitals impact growing local audiences, those on the daily commute between Geelong and the city and those holidaying on the Bellarine and Great Ocean Road.

The latest conversions, which are due to go live this month, further accelerate oOh!’s dominance of Boomtown markets.

“The launch of digital sites in Nunawading and the digital upgrades in Lara are significant additions to oOh!’s portfolio and further cement our position as leaders in both metro and regional markets nationally.”

The digital expansion in Victoria follows the addition of four strategic supersites in Queensland. In June, oOh! launched a newly constructed digital supersite at Chermside, a key arterial connecting the northern suburbs to Brisbane’s CBD. Premium sites were also secured as part of the Queensland Rail tender.

Michael Cali, national commercial director, oOh! said: “As the largest Out of Home media company in Australia, our ongoing capital investment is a priority as we deliver advertisers more options than ever to connect with audiences right across the country on our Unmissable network.”