oOh!Media: Advertisers are holding back spend to later in the year 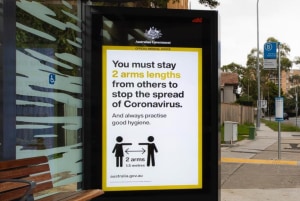 oOh!Media says advertisers have moved their bookings to later in the year as isolation measures to protect against the pandemic reduce audiences.

The outdoor media specialist, which recently raised $167 million in equity capital to bolster its reserves during the coronavirus, says there was a large movement of contracted client bookings from the March quarter.

"April in particular, move to later in 2020," the company says in a presentation to a Macquarie Bank conference.

The company says the rest of the June quarter is still "challenged".

However, advertisers have moved from an initial “stop approach” to planning throughout May/June.

The company says out-of-home has enjoyed strong audience growth as well as growth in market share out of total media ad spend.

oOh!Media expects these trends to continue.

The company has also found cost savings, which it now says is ahead of the $20 million to $30 million forecast earlier.

oOh!Media estimates that the physical separation rules during the pandemic have reduced out-of-home daily audience in Australia and New Zealand by more than 50%

But it believes the audience, which has shown growth over the last two weeks, will return quickly when government policies change.