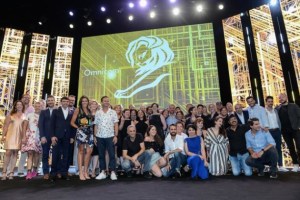 The Omnicom team at Cannes Lions

The company ultimately opted to rent data, instead of owning a data company, Nelson explained.

"We see data as a commodity. In fact, when you look at the Omni platform we announced deals with; LiveRamp, Neustar and with Experian, all of which have similar first-party style data. We just believe that this enhances our position of neutrality and removes any perceived conflict we might have with our direct clients,” he said.

Omni was announced last week, built out of Ominicom’s data platform Annalect and is designed to deliver a single view of the consumer, which can be tracked and shared across the holding company’s various practices, including creative, CRM and media.

On the earnings call, Omnicom flagged its intent to invest more in data, technology and analytics.

Wren said that CRM, consumer experience, healthcare and PR all did well in the region, with combined growth of around 4%. But, he explained, those gains were "weight down” by client losses in North America, as well as a decline in CRM, execution and support.

Overall, Omnicom reported a 2% rise in organic revenue - a closely watched measure that excludes foreign exchange rate changes and mergers. Analysts, on average, had expected a 2.3% rise, according to research firm FactSet.

Shares in the company fell almost 8% following the results, with its shortcomings also impacting rivals WPP, IPG and Publicis, also experiencing a dip.