Ogilvy creatives call for Lebron James to move to Australia 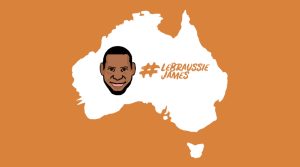 Ogilvy Sydney creatives Fred Corazza and Raphael Valenti have joined forces to pitch Australia as the next home for NBA superstar LeBron James.

The campaign is a personal project and is not from Ogilvy, with Valenti telling AdNews he drew inspiration from other cities trying to recruit LeBron.

"People in Philladelphia and New York did out-of-home to get LeBron's attention. When we saw that, we half-joked that we should pitch Australia to LeBron, it's a great country after all," he says.

The two created a video campaign highlighting all the best offerings from the land down under, going so far as to suggest changing the names of iconic Australian landmarks.

The commercial offers naming rights to the Sydney Opera House, which could become LeBronpera House or changing Darling Harbour to Darling Harbron.

The ad is also backed by a website featuring important details, such as the geographical location of Australia.

"We kinda wanted to create a cheeky campaign with an Aussie humour tone," Valenti says.

"Although the project is in the end a joke - because LeBron wouldn't realistically swap the NBA for Australia - we think that it should be taken as half serious and half joke."

Despite this, both Valenti and Corazza have one real hope for the campaign, that 'King James' himself will at least see the video and get behind the joke.

As for a campaign such as this working on other international sporting stars, Valenti says while there is hope, the duo aren't holding their breath.

"We would like to say two blokes could influence the outcome of an athletes decision but that wouldn't be right. But we do think Sydney - where we live - is a wonderful city to live in," he says.

"The city itself has attributes enough to attract great players. Matter of fact, Andrew Bogut is coming to play in Sydney after years playing in the NBA."