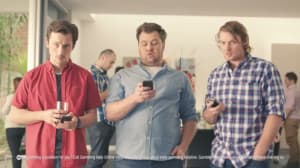 The television commercial received a number of complaints for being “disgusting” in showing the sweaty man wipe his groin.

One said: “The vision thrust into my lounge room of some mindless bogan wiping his testicles with a towel, then wiping sweat off his underarms and then to go on to sniff it is totally disgusting and offensive.”

Another said: “I think it is gross and offensive. Not a thing that a gentleman would do in public.”

In its determination, the ASB dismissed the complaint on all accounts.

On complaints regarding the man being “disgusting” the watchdog noted that the issue amounted to an “ick” issue or a question of “bad taste”, which doesn't fall under the provisions of the code.

Sportsbet responded by saying the advertisement was meant to be “light-hearted.”

“The advertisement is clearly intended to be treated in a light-hearted manner, and continues on the theme from a previous Sportsbet advertisement which showed the same two men to be obviously and humorously unfamiliar with common gym behaviour,” Sportsbet said.