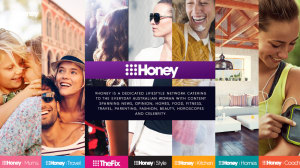 A year after launching its dedicated women’s network 9Honey, head of lifestyle Helen McCabe has revealed she plans to “rebuild the website from scratch”, as well as launch a TV show inspired by its content and a subscription women’s site for professionals in 2018.

Nearly 1000 industry execs attended Nine's upfronts on Wednesay and speaking at a media briefing ahead of the event, McCabe said the plans for 9Honey are ambitious but said the platform has “exceeded expectations”, reaching its record audience of 1.9 million in July, according to Nielsen Digital Ratings.

The rebuild of 9Honey, which is the umbrella brand for Nine's lifestyle sites 9Kitchen, 9TheFix, 9Elsewhere, 9Style, 9Mums and more, will keep to the same colourful theme and commercial focus but allows McCabe to “completely reimagine” the site which she admitted she "quickly threw together" a year ago.

“The success of 9Honey has afforded us the luxury of looking at how big the network can be and where we can take it and we’ve been doing a lot of work around the core 25-54 segment,” McCabe said, adding there has been so much commercial interest that the media company has had to remodel its sales team to meet the demand.

“When we launched we were inundated with clients and I don’t know if we did the most with that because it was still so young as a concept, but we’ve certainly remodelled the business to respond a bit like a start-up.

“We realised we needed to be much more responsive, which is often harder for big media companies. But we are really confident that we have that right, which is why we are now throwing a redesign and television into the mix.” 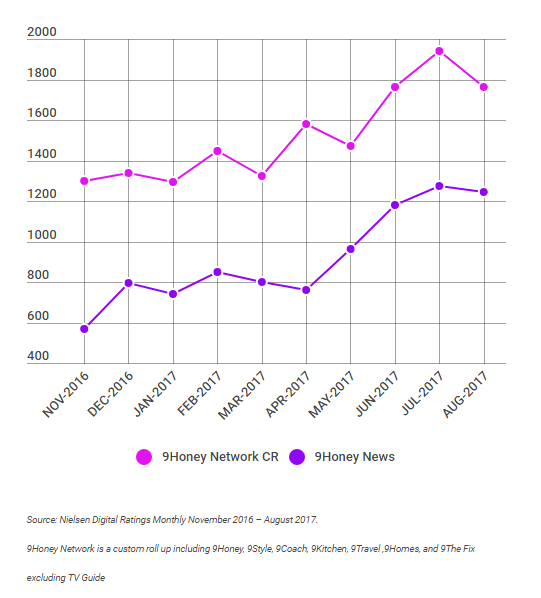 When 9Honey launched a year ago, McCabe told AdNews it was her ambition to integrate Nine’s digital network into the TV business as part of a broader cross-platform strategy.

Today, 9Honey has revealed it will launch a live half-hour chat show, The Sweet Spot, which will follow the next season of Married at First Sight at 9pm on 9Life, featuring behind-the-scenes exclusives, commentary and highlights. Read more about Nine's 2018 programming slate?

With a slate of rivals competing in the women’s space, such as Yahoo7 Be, Mamamia, Bauer's Now To Love and Whimn, McCabe said is confident The Sweet Spot will make Nine stand out from the crowd as well as play to the network’s strengths.

She said it has previously been hard to get the two sides of the businesses, which are located in different Sydney suburbs, to work together, but it was a “logical next step” for 9Honey.

The show will offer Married at First Sight sponsors more inventory, but McCabe said she’d also like to see new brands get involved in The Sweet Spot.

“Over the past year we have seen a real opening for 9Honey to amplify our big 7.30pm television franchises and this new chat show format around Married at First Sight will help us to further own that conversation across all platforms,” McCabe said.

In what McCabe said is a “totally different play” for Nine, the media company is launching a new subscription site aimed at professionals and entrepreneurs.

McCabe wouldn’t reveal who will be leading the new venture but says she has a few hires in mind, as well as drawing from her existing team, including Lizzie Young and Annie Quinn.

Future Women was born from the recognition that Nine digital business was “weak in the premium and millennial space”, McCabe said, adding there is gap in the market for this type of content.

The site, while forming part of the network strategy, will be a standalone site targeting a whole new audience. McCabe would not reveal the subscription cost, saying Nine is still working out the business model.

“Future Women offers the chance to connect with a premium AB audience in a unique and sophisticated environment. But at its core we want to help women find professional and personal success,” she said.

“The content will be longer in form and curated to be differently to anything currently in the Australian digital space,” McCabe said.