Nine Upfronts: $1 million for the best commercial at the NRL State of Origin 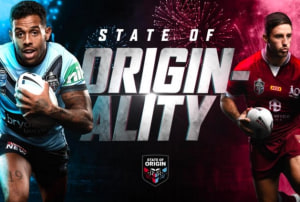 Nine has announced a $1 million challenge to brands, marketers and creative agencies to take the NRL State of Origin into a broader part of Australia’s cultural fabric as a must-watch event, similar to the Super Bowl in the US, where even the ads are unmissable.

At Nine's 2021 Upfronts presentation, the media group announced the State of Originality, a competition with $1 million in advertising inventory across Nine’s television, radio, digital and print assets on offer. The winning commercial will be judged as best on ground in the live telecast by an esteemed panel.

To be deemed eligible to enter, advertising must be booked within the three-game period of State of Origin in 2021.

“State of Origin has long been Australia’s Super Bowl when it comes to the audience it garners,” says Liana Dubois, director of Powered. “Now is the time for the same to be true of the advertising contained within it.

“The State of Originality is a call to arms for marketers and their creative teams to elevate the power and importance of creativity in delivering results.

"The State of Origin reaches up to four million people, that’s the reach covered. We invite you to crack the creative as part of Nine’s State of Originality.”

While some big brands have been taking advantage of Australia’s most-watched sporting events, including the Australian Open, State of Origin and the NRL Finals, there remains an opportunity for every ad booked at the State of Origin in 2021 to go down in history and become part of an honour roll of Australia’s ads like those in the NFL Super Bowl.

“We want to challenge brands to come up with Australia’s version of Budweiser’s ‘Wassup’, or Apple’s Ridley Scott-directed ‘1984’ which introduced the Macintosh computer to the world," says Dubois.

"We want to see brands have fun and create magical moments for viewers, like when Darth Vader struggled with his powers before managing to lock his dad’s VW with just the power of The Force.

“Australia is a creative nation and we want more ads that make advertising famous. We want the ads to be talked about the next day just as much as who scores the winning try.”