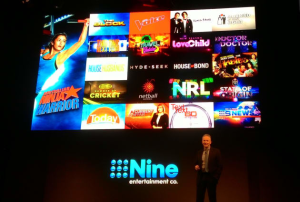 Nine’s has revealed a new-look website and digital branding strategy that provides advertisers with a platform agnostic approach to reach audiences and a range of new mobile ad formats to improve viewability and dwell time.

The rebranded site nine.com.au, which officially launches on 29 June, ditches the MSN butterfly and introduces the nine dots that now mark all of Nine’s brand extensions. Content on the site will be led by managing editor Emma Chamberlain.

Nine has also launched a new food vertical, 9Kitchen, which has 20,000 recipes and will be led by editor Jane de Graaf.

Nine said it will be the first media company in Australia to utilise VR technology for mass audiences and brands.

The network has set February 2017 as the month it will begin trading linear TV programmatically. Nine already trades 85% of its digital inventory programmatically and said it is on track to trade 100% within a year.

At a gathering of advertisers and agency partners last night, Nine offered a sneak peek of the new site that will officially launch on 29 June.

In the past 12 months have, Nine has restructured and rebranded its digital content into 14 verticals, launched its catch up service 9Now (which has 1.4 million registered users) and launched new female skewed channel, 9Life.

“Ultimately, at the end of the day we want to be able to trade audiences agnostically across all platforms. For an advertiser, really what they want is a person or eyeballs to interact with and understand their brand. We will be able to do that across many millions of Australians in any given month through our properties,” Nine chief digital and marketing officer Alex Parsons told AdNews.

“We’re the only publisher in Australia which owns its own destiny across video, TV and digital and are not muddied by different companies and different organisational structures.”

Key features of the new website include a much cleaner layout, more interactive functionality for users, and plenty of bells and whistle for advertisers with mobile use front of mind.

Nine has launched a raft of new mobile ad formats, including super skin, side push, top and tail, and cinema to better target the six million people who access Nine content on smartphones each month.

“Historically, mobile ads didn’t work as well because people were really trying to translate what was historically desktop ads onto a mobile. We need to think about mobile in a completely different way,” Parsons added.

“So some of the ad formats you will see such as the side push really have great dwell times (of between three to 12 seconds) for consumers and they don’t get in the way on the content. We want to create high quality content and also high quality ads and marry these together to create a much better consumer experience.”

Nine’s massive bank of data, featuring more than 15 million unique IDs, is an important part of the mix, helping to make sure ads are relevant and timely.

“When you combine the data it ensures ads are contextually relevant and aren’t intrusive, they align with the content and user experience,” Parsons said.

An example of this at the presentation was a Tiffany’s ad that featured a model wearing earrings. Consumers can click on the earring to bring up more information about the product and how to purchase it.

Nine said it will become the first publisher to create virtual reality experiences for mass audiences and brands. An example Nine had on the night was a State of Origin VR experience.

“We believe that virtual reality represents the next frontier of storytelling, and as a content creator we play a pivotal role in sparking consumer inspiration with this new medium,” Nine chief sales officer Michael Stephenson said.

“We will generate more than 500 hours of local entertainment and over 30 hours of Aussie drama into Nine and 9Now’s peak, live-streaming and catch-up schedule in the next 12 months," Marks said.

“This, alongside our investment in new digital brands such as 9Kitchen, will be one of our biggest investments to date when it comes to delivering local content and stories that matter most to Australian consumers.”