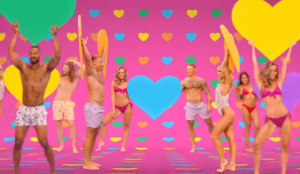 Nine pushes its 'we are the one' slogan with a colourful balls theme and new faces, including The Today Show co-host Georgie Gardner and Love Island host Sophie Monk as well as Hamish & Andy and a host of Nine's TV celebrities.

Ten's promo pushes the message that it is 'here to entertain' with its key tent poles and a touch of comedy – Russell Coight's All Aussie Adventures is back.

The network spruiks Gordon Ramsay's guest appearance on MasterChef, while viewers get a glimpse of what appears to be Bachelor in Paradise and there's plenty of creepy crawlies doing the bidding of I'm a Celebrity...Get Me Out of Here.

The ABC's 2018 promo gives viewers a glimpse of the Monkey Magic reboot, a David Attenborough doco on Tasmania and other new shows.