Nine's The Briefcase 'can grow' after mixed reaction

But after its premiere, Nine's The Briefcase may make a better fist of appealing to Australian audiences than the CBS version did in the US, where the show flopped.

The premiere drew a respectable TV audience of 733,000, which will please executives as it was up against the might of Ten's MasterChef and Seven's House Rules.

Nine's managing director of programming and production Andrew Backwell tells AdNews network executives expected a mixed response but were optimistic it would prove a hit over time.

"We knew it was going to be controversial and it's had a mixed response on social media, half were positive about the outcome of the show while the others were still outraged by the premise," he says.

"I think we are going to see growth for the show. It's a lot like Married at First Sight. There was a lot of people critical about it at first, they got to see the show, that it was positive and real, and it became a big hit."

The premise of The Briefcase is that two families are each given $100,000 and have to choose whether to pocket the money or give it to the other family. As the show progresses, the families learn more about one another.

Melbourne couple Rod and Mandy McCraken struggle to make ends meet as Rod has had to give up his job to become Mandy's full-time carer. The Carters live on a sheep farm that suffered great losses to bushfires in 2014.

Both are tragic stories about Aussie battlers that must now choose whether to help themselves or one another.

In the end both families kindly decide to donate all of the money to each other - a happy ending after a heart-wrenching hour of television.

"These are amazingly generous people who have fallen on hard times. Yet both of those families decided to give all of the money to someone else, it was an incredible act of generosity," Backwell says, adding that "no two episodes have the same result".

Many viewers will have switched onto the show to see what all the hype was about and been shocked that two families with enough to deal with in their day-to-day would be made to choose between helping themselves or another desperate family.

The response on social media (see below) was somewhat negative, although Twitter tends to attract more negative feedback than positive. Quite a few responses questioned the morality of exploiting human hardship for ratings.

It will be interesting to see how many return next week and the response to families that aren't as heart-warming as the McCrakens and Carters.

Backwell says what will help the series gain traction where the US version perhaps failed is Nine's casting.

"We've cast middle class families who have fallen on hard times by no fault of their own. They are relatable to people out there and it can happen to anyone," he says.

"If we had cast families that were down and out, didn't care, didn't try, it was their fault they'd fallen on these hard times by being slack, it would be a different reaction.

"These are decent families... I don't believe you could watch last night's program and not feel compassion for those two families."

After Seven and Nine News, MasterChef won the evening with 1.06 million metro viewers, followed by Seven's House Rules with 963,000. 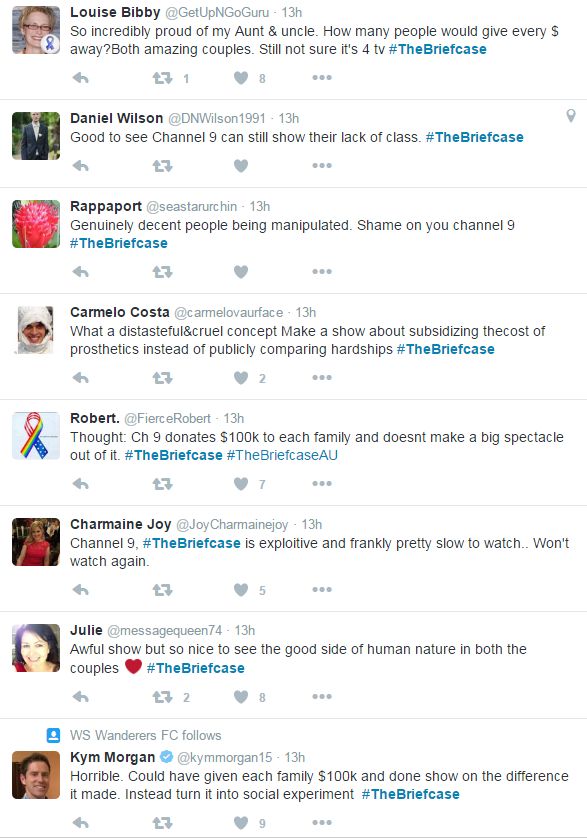