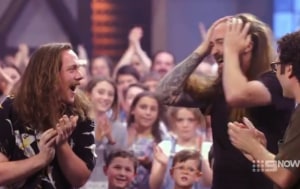 The finale itself gathered 1.22 million for the highest rating episode of the series.

The national peak audience, including both metro and regoional, was 2.027 million.

The winning creation was a gothic mansion by Western Australians Alex and Jackson who picked up a $100,000 cash prize.

"It's pretty surreal to be honest," says Alex. "The people we were building against were just really brilliant builders and we were intimidated by them the whole time. To have come out on top, it's really hard to comprehend, to be honest."