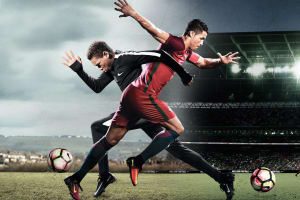 Can Ronaldo adapt to his new life in an English teenager's body?

It's been a hectic 24 hours for Cristiano Ronaldo. The Real Madrid star, injured early in the Euro 2016 final overnight, watched his team beat hosts France in a nail-biter to claim his nation's first major international tournament.

But it's not just on the field where Ronaldo has shone - CR7 starred in the most shared (and talked about) Euro ad campaign , Nike's 'The Switch', which was shared 335,618 times across social media, according to ad tech company Unruly.

This placed it well above the next most viral ad, Volvo’s ‘Prologue’ (shared 61,421 times) starring Swedish striker Zlatan Ibrahimovic.

In 'The Switch', Ronaldo collides with English ball boy Lee (played by Gerson Correia Adua) during a match, swapping bodies with the youngster. The next day the 16-year-old wakes up in Ronaldo's mansion with all of his luxurious trappings to boot. Meanwhile, Ronaldo is taken to the teenager's bedroom in an English terrace house.

The story takes viewers through the awkward adjustment for both. 'Ronaldo' has to re-learn Portuguese and his football skills at training with Real Madrid, while 'Lee' impresses his family with his 'Chinese' and dazzles friends with silky new skills they've never seen before.

Both players eventually work their way to the very top and meet each other in an international game for one final clash.

The entertaining ad features several football superstar cameos and shows us that all of those years of Ronaldo play acting on the field have not gone to waste.

The six-minute spot, created by Wieden & Kennedy and directed by Rattling Stick's Ringan Ledwidge, is the longest brand film Nike have done.

The other Euro ads worth a mention include Zlatan's Prologue, a beautifully shot montage that pays tribute to the greatest player Sweden has produced as he hangs up his international boots.

Paddy Power brings us humour with its defiant Scotland Euro 2016 anthem, shared 47,895 times. The Scots may be the only British team to fail to qualify, but they're not bothered.

Further down the list, UK pundit and class clown Chris Kamara dresses up as en elderly man for Carlsberg and gives away Euro 2016 match tickets to commuters who give him a seat on the tube, shared 16,135 times.

Meanwhile, Portuguese liquor brand Licor Beirao wins the opportunist award, cleverly taking advantage of a nasty Bruno Alves 'fly kick' on English player Harry Kane. It's a wonderful example of making stadium advertising work even harder and the yellow card line at the end is just perfect (Alves was sent off by the way).

It was shared 14,993 times and the drink, we suspect, will be shared quite a bit more in the coming days.