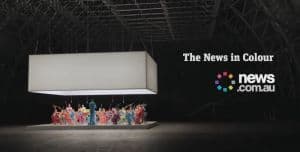 NewsLifeMedia (NLM) has rolled-out a new campaign under the header, “news in colour”, as part of the brand's biggest ever consumer marketing campaign ever.

The campaign, which launches on Sunday 31 May, was created by Bohemia Group with The Glue Society and Revolver collaborating the video production. News.com.au general manager Julian Delany told AdNews that this campaign will act as an important differentiator in the crowded news space.

“It's not just competitive, it's very congested,” Delany said. “We needed to have a campaign that will help us stand out a little bit from the crowd, certainly not isolate or alienate our current audience, because we are the biggest at the moment and that's a challenge in itself.”

“It's not like you're trying to get to number one, we're trying to maintain that status, so creating a campaign with a brand that's doing relatively well is tricky in itself. We've got to have a message that goes to both sets of consumers, those that do go to news.com.au and others who aren’t, I think news in colour will help us do that.”

While this isn't the first time NLM has rolled out a campaign for News.com.au Delany told AdNews that he feels the brand really understands where it's coming from now.

“We're much more aware of who we are now, and I think we're able to articulate that in the strategic part of the campaign, working out where we're going to go,” he said.

“We want to deliver on a promise and that's to deliver news in colour and we can do that, and that doesn't mean we're going to sit still from a product or a commercial perspective, this really helps, it makes it very clear and very simple on what we have to deliver on.”

Bohemia and the other agencies worked with NLM on a project basis for the campaign as the lifestyle arm of News Corp doesn't have an agency roster like its parent company.

While Delany wouldn't be led on spend for the campaign he told AdNews that when you take into account production, fees and media spend, the campaign was in the multimillion-dollar category.

The campaign will run across digital, TV, radio, magazines, outdoor and cinema.

See the spot for yourself below: