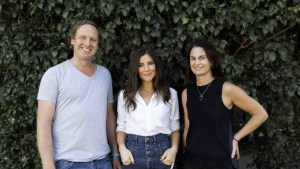 Jane Young has been appointed GM of Publicis in Queensland. Young joined the agency in July last year as client services director and has since restructured and expanded the client service team to "match evolving client needs in creative and integrated communications". She has more than 15 years’ experience in the UK, New Zealand and Australia and prior to joining Publicis she was GM of Ogilvy Queensland. Her appointment comes off the back of a recent period of growth for the agency after client wins including Queensland Health, Cross River Rail and The Local Government Association of Queensland, as well as strong client growth with Suncorp.

Whatsapp co-founder and CEO Jan Koum is leaving Facebook. The move follows disputes over recent privacy issues within the company. Koum posted on Facebook, stating that after close to a decade since he and partner Brian Acton started Whatsapp, it was time for him to move on. "I’m leaving at a time when people are using Whatsapp in more ways than I could have imagined. The team is stronger than ever and it’ll continue to do amazing things. I’m taking some time off to do things I enjoy outside of technology, such as collecting rare air-cooled Porsches, working on my cars and playing ultimate frisbee. "And I’ll still be cheering Whatsapp on – just from the outside. Thanks to everyone who has made this journey possible," he said in his post. Facebook founder Mark Zuckerberg commented underneath the post and said he would miss working with Koum and wished him well.

Ooh!Media will upgrade its 'Study' network with the further digitisation of its inventory at two leading universities. The media company has secured long-term contract renewals with both the University of Sydney (USYD) and the University of Western Australia (UWA). Under the agreements,Ooh will install new slimline screens as part of UWA’s own $80m investment into campus refurbishments which are due for completion in 2020. The company is also set to convert all USYD classic panels to digital formats. Ooh group director of locate Adam Cadwallader said the new agreement with the two Australian Universities would allow the company to deliver more relevant and advanced media solutions.

Australia’s health and wellbeing network, Tonic Health Media, today announced the acquisition from Access Telehealth of myDr.com.au Australia’s largest commercial health information website. The site currently has 1.4 million unique visitors per month. The deal will incorporate myDr’s premium inventory with Tonic’s existing out of home assets, transforming the health media network. The new and evolved network will now reach 17 million consumers per month across all channels. To drive the new offering, Tonic has hired Michelle Mansour as commercial manager for digital. Mansour joins from Bauer Media, where she worked for the past thirteen years.

Tonic will be presenting at AdNews' Media + Marketing Summit this Friday 4 May.