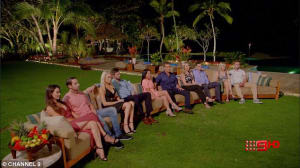 Nine's The Last Resort is making headway in the top 20 show's rankings, moving from 21st on its debut to 19th, with an increased average metro audience of 21,000 viewers. Wednesday night's rating saw Ten's tentpole prime time show MasterChef pull in 876,000 viewers, down 100,000 from the previous night. However, the cooking show was the top pick for all demographics below 55s. Seven's House Rules remains in the top 10 programs, coming in at seventh with an average metro audience of 751,000 viewers. Seven won the daily share with the main channel picking up 18.3% of audiences. While Nine's break-up show fails to crack into the top 10, the network's main channel came in second in daily share, with 17%. Ten followed closely behind with 15.8% of viewers.