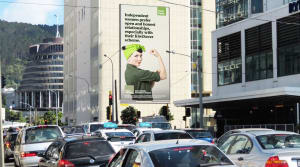 The Seven network has picked up 1.04M viewers according to the preliminary overnight OzTam figures.

The show attracted the most viewers for a non-news program following Nine News and Nine News 6.30 to be the third most watched show of the evening.

The company was founded in 1997 and has 113 panels across the country.

APN Outdoor New Zealand MD Phil Clemas said: “Securing the Roadside Attractions billboard assets is a strategic move by APN Outdoor and we are very pleased to have finalised the acquisition.

"The portfolio complements our existing network very well allowing us to deliver broader, national campaigns and we are looking forward to providing our clients with even more opportunities in the outdoor space.”

ASTRA has unveiled its speaker line-up for the annual ASTRA conference in Sydney next month.

ASTRA CEO Andrew Maiden said the 2015 Conference – themed ‘Outside The Box’- will explore the direction the industry is headed in the face of disruption.

“Digital disruption is not a new concept, but the disruption of the TV industry has taken longer to arrive than it has in other industries – for example music,” Maiden said. “Television has been able to learn from their mistakes, getting ahead of disruption and harnessing it.