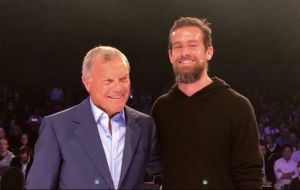 WPP boss Martin Sorrell has finally joined Twitter after he interviewed the company's chief executive Jack Dorsey on stage at Dmexco. Sorrell grilled Dorsey on why the social network isn't growing at the same rate as its rivals. WPP spent $240 million on Twitter in 2015, growing to $300 million in 2016, but that figure will remain flat this year, Sorrell says. In contrast, WPP's clients will spend $5.5 billion with Google and $2.3 billion with Facebook this year. Dorsey admitted that Twitter has "not made it easy enough for people to find their interest", also adding Twitter is not looking to sell, despite industry rumours.

Bohemia has been appointed by Schneider Electric to lead its media strategy, planning and buying. Headquartered in France, Schneider Electric is the global specialist in energy management and automation, with 144,000 employees serving customers in more than 100 countries worldwide. The account was won in a competitive pitch that saw a number of media agencies and Bohemia compete. Last week, Bohemia has won the $50+ million Steinhoff account.