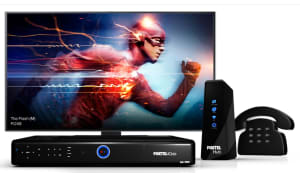 Foxtel has grown revenue by 5.5% to $1.66 billion in the first half of its fiscal 2016 reporting period. However, higher programming costs have left the cable TV provider with a 7.7% drop in EBITDA to $434 million.

Foxtel reported an 8.1% increase in subscribers to 2.88 million, partly due to lower cable and satellite subscription fees introduced in 2014.

AMP is Google's answer to Facebook's Instant Articles and Apple's News, but differs as it will be open source, which means anyone can use it.

The Wall Street Journal, BuzzFeed and the Washington Post are among publishers who will have AMP ready sites next week.

However, many revenue streams for publishers will not be available. These include interstitial ads, site takeovers, script-based elements, widgets that recommend reading, and videos that have to be watched before visitors can access content.

Twitter has rolled-out new tools to make it easier for brands and consumers to communicate. The tools will allow for brands to move conversations into direct messaging, meaning people can now easily have private conversations with brands.

The move was announced in a blog post saying: “Customer service conversations often start in Tweets, but then need to transition to a private channel when personal information is required. We’re making that transition as easy as a single click. A business can now add a deep link to their Tweets that automatically displays a call to action button, which allows the customer to send the business a Direct Message, quickly and easily.”

Toyota Australia has recalled 98,000 RAV4 SUV cars due to a potential seatbelt fault in the event of a crash.

RAV4 vehicles built between August 2005 and November 2012 are affected by the recall. Toyota said in a statement there is a potential issue with both outboard seat belts of the second row seats in the event of a high-speed frontal collision.

The warning is part of a global recall of almost three million vehicles issued by Toyota Motor Corp.

Match Media’s corporate social responsibility program, SPARK, has raised $46,000 for the Sydney Children's Hospital, with help of their media partners.This money will go towards the funding of a much needed trauma machine for the hospital.

The agency is now on a mission to add significantly to that figure and in 2016 will once again use their talent to raise even more. Last year’s challenge had the staff battling it out to organise the most profitable event of the year. This year they will be divided into 4 teams with each team having a quarter of the year to organise and run their event.