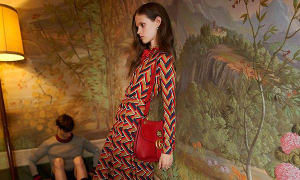 An ad tech startup that creates automated copywriting for marketing campaigns has started a $30 million financing round led by Goldman Sachs. The company, Persado, has used what it calls “cognitive content” in more than 4000 marketing campaigns for clients including American Express, Vodafone, eBay and Expedia.

An online video for Italian fashion house Gucci has been banned for featuring an “unhealthily thin” model. The Advertising Standards Authority – the UK ad watchdog – banned the ad after it received a complaint. It said the ad irresponsibly showed a model with a body that was disproportionate and overly thin.

Coca-Cola’s ‘Hilltop’ commercial – better known to younger audiences as the ad in the finale of Mad Men – has been remastered to give it a new lease on life. It remastered and colour-corrected the 35mm film, making the commercial ready for airing on 4K television. While Coke has announced the remastering of the ad on its blog, and uploaded a lower-res version on its YouTube channel, it has not yet outlined what its plans for the newly revamped advert will be.

Coca-Cola North America director of multimedia production, Sarah Traverso, who remastered the ad says: “So what was I doing with the original footage almost 45 years later? Technically speaking, I was remastering the 35mm film for 4K Television, and colour-correcting it. In layman terms, that means I was preserving an iconic gem for a new generation.”

Qantas has announced that Michael L’Estrange AO will be joining its board as a non-executive director.

L'Estrange was head of the national security college at the Australian National University from 2009 to 2015 and is currently a professor at the college. He studied at The University of Sydney and later as a Rhodes Scholar at Oxford University. He has also been a member of the Rio Tinto Board since 2014.

Pinterest has rolled out its Promoted Pins service in the UK, the first country outside of the US where advertising has been introduced into its model.

The photo sharing service has announced John Lewis, Nestle and Tesco as the first brands to advertise on the platform. Read more on its blog.