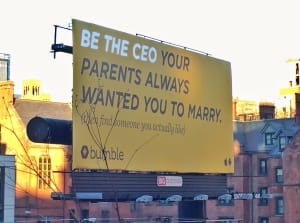 Ad of the week: Bumble

To take on Tinder, dating app Bumble knew it had to go big. Erecting billboards across America, Bumble is encouraging daters to be the CEO, rather than date the CEO in a modern age campaign aimed to empower women. With female founder Whitney Wolfe at the helm, Bumble has been on a mission to revolutionise dating and give women more control and confidence.

@bumble_app just saw this. My boyfriend and I met through Bumble. It's our one year anniversary two weeks today 😙 pic.twitter.com/eCDwSqafQl

Snapchat parent Snap Inc. debuted on the stock market Thursday and immediately soared on its first two days. But now, shares have tumbled more than 12% on day three. After finishing Friday at $27.09 per share, Snap closed at $23.77 on Monday, beneath the $24 where it opened on its first day of trading. This is still above the $17 IPO price, but only select institutional investors and high-net worth individuals were able to buy it that low.

Shazam CEO Rich Riley says the business could be an acquisition target now it is profitable, according to a report in Business Insider. With integration into Snapchat and a decision to pivot away from selling songs towards advertising as its main source of sales, Riley believes the business could be scooped up by a company looking for a foothold in music or advertising.