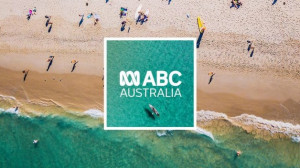 The Australian Broadcasting Corporation (ABC) will relaunch its international television service under a new brand, ABC Australia, as it looks to bolster local content in Asia and the Pacific regions. The rebranding follows the lifting of the geo-block on the ABC News live streaming video on the broadcaster's website and YouTube channels, allowing content to be viewed globally. From 1 July, the Australia Plus channel, previously known as Australia Network, will also be moved under the 'ABC Australia' brand. "The ABC is Australia's most trusted and independent source of conversations, culture and stories," ABC head of international strategy David Hua says. "The rebranding of the international television service makes sense to our audiences overseas, who want distinctive Australian content from a high-respected media organisation." The newly rebranded service will still deliver original ABC content to international audiences including Anzac Day, Stargazing Liver, Tropfest, live coverage of men's and women's AFL matches and Australian news, entertainment and drama.

AT&T has entered into a definitive agreement to acquire global internet tech company AppNexus. The deal – expected to close in the third quarter of this year – will see AppNexus become part of AT&T advertising and analytics. The move will see AT&T investing to accelerate the growth of its advertising platform and strengthen its leadership in advanced TV advertising. “Ad tech unites real-time analytics and technology with our premium TV and video content, AT&T advertising and analytics CEO, Brian Lesser, said. “So we went out and found the strongest player in the space.” AT&T says it will continue to invest in and build on AppNexus’ technology as it integrates with AT&T’s first-party data, video content and distribution. AppNexus CEO Brian O’Kelley says by combining AT&T’s assets with its technology, it will help brands and marketers “power new advertising experiences for consumers”.

In a statement to AdNews regarding the Australian market, O’Kelley says it "remains 100% committed" to its customers here and is confident the deal will create more value for them. “We’re excited about the new value this deal will bring to our advertiser and publisher clients in global markets like Australia," he says.

See: It's time to 'weed out the bad actors' in ad tech, says AppNexus chief