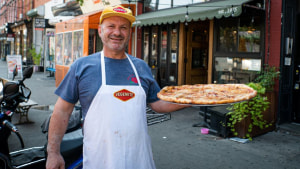 In ‘Australia, you’re doing it wrong!’ Fabiano, who created a VEGEMITE pizza, tells Australians the spread should be enjoyed on pizza rather than toast:

“Aussies love their VEGEMITE, but I only ever hear about them eating it on toast. I love it on pizza pie so I decided to try it on my menu, test it out with the crowds and maybe show the Aussies a thing or two.”

Domino’s ANZ CMO Adam Ballesty says Domino’s is returning Australia’s favourite flavour to the heartland: “There’s something so quintessentially Aussie about a VEGEMITE and cheese pizza, and we’re excited to be able to offer this unique combination to customers right here at home.”

Thinkerbell enlisted Jason Dundas, from Dundas Media in New York, to work with Giovanni and Rosa’s pizza to bring the special menu item to life. The agency’s chief creative tinker Ben Couzens says the proof is in the pizza:

“Most Aussies are on autopilot when it comes to how they use VEGEMITE. So we thought a great way to snap them out of it is to show someone they’d never expect cooking with it. Giovanni loves the stuff and so do his customers!”

“While we love VEGEMITE on toast and we always will, VEGEMITE is so much more than just a spread. It’s a flavour that will make any meal that much mitey-er and is why VEGEMITE Squeezy was launched less than a year ago – to make it easier than ever to add our nation’s umami to their favourite recipes.”

New Yorkers can taste-test VEGEMITE and Cheese pizza at Rosa’s Pizza in Brooklyn upon request, whilst stocks last, and Australians can order theirs for a limited time from Domino's.