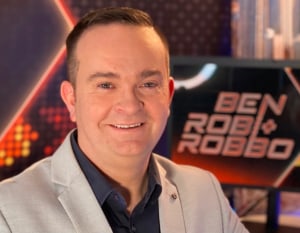 Key content has already been locked for a launch later this year but McKnight is also speaking to Australia’s best creators to come up with the most engaging programming slate to rival traditional tv.

“Remember when broadcast TV was live and exciting? I miss those days,” says McKnight.

“We want to provide creators the opportunity to connect with their audience and bring back the ‘anything can happen’ aspect of live tv – something sorely missing these days.

“The technology now exists to allow us to build a TV network for a fraction of the price of broadcast TV, but with all the bells and whistles.

The show, hosted by Ben Norris, Rob McKnight and David Robinson, has featured some of
Australia’s biggest names as guests.

Other content includes a daily fitness show will provide an alternative to going to the gym for busy people on the run who would prefer to work out from home.

Host Amanda Howard, also known as the serial killer whisperer, says she is excited about the new format.

“Not only will you be able to hear the confessions of these terrible people, but you will be able to see their facial expressions as they are caught in the trap by investigators,” she says.

“A video format will be a whole new experience for fans of our true crime podcast.”

Behind the scenes, some of Australia’s biggest names are in negotiations to form part of the new business.

“Our modelling shows this will be a very profitable subscription service,” he says.

“The start-up capital required isn’t that much and the ongoing costs are very reasonable. We can afford to pay everyone involved and still make very healthy profits. It’s a win-win for investors and creators.”

McKnight believes his offering will stand out from the crowd:

“Everyone has that one big idea and this is mine,” he says.

“LIVE+ is going to change the streaming market forever. No-one is providing a live entertainment service like we plan to do. I honestly believe the big players are going to sit up and take notice of what we’re doing”