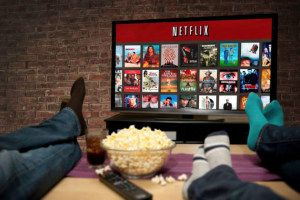 In May, Netflix subscription numbers were approaching five million, but had then stalled until August, when its growth found a “second wind”.

More than a third (35% of people) with a household Netflix subscription spend three to seven hours watching and 14% spend eight to 14 hours. Less than one in 10 Netflix subscribers (9%) had a real ‘binge-viewing’ week, watching 15 or more hours of content.

The research adds weight to Foxtel CEO Peter Tonagh's comments that 6% of Netflix subscribers watch 80% to 90% of viewing hours.

“The bulk of people using Netflix or Stan or other SVOD services use it as a complement to other viewing and are watching a lot of light TV,” Tonagh said at yesterday's ReThink TV event.

Although the overall take-up of Netflix now rivals Foxtel, Roy Morgan research found that those with the Pay TV provider spend around twice as much time watching, with the majority of Foxtel subscribers spending at least eight hours a week watching.

“The full impact of Netflix as a competitor for viewership, and entertainment dollars, remains to be felt. Just yesterday, Netflix announced it was introducing a downloading option for mobiles and tablets, allowing subscribers to watch selected shows offline—starting with their original content including Orange is The New Black and The Crown,” Roy Morgan Research CEO Michele Levine said.

“Video streaming weighs heavily on mobile data limits. Offline access now further distinguishes SVOD from traditional broadcast television, which remains an at-home media. Other free and paid-for media owners will need to continue to adapt to the new ‘on demand’ world of television in different ways.

“Local competitor Stan actually benefits from continued Netflix growth. As the more widely known service, Netflix is the gateway into SVOD. The bulk of Stan’s customers started with Netflix before adding the second service to their home entertainment mix.”