Native advertising: Too expensive and too much effort for agencies? 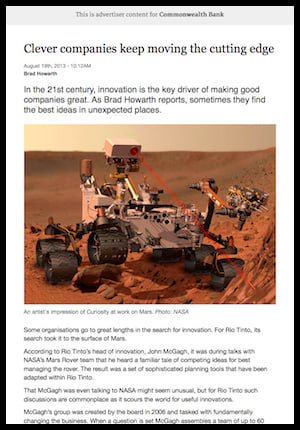 Early in the New Year, native advertising got a major boost when the New York Times announced a six-figure three-month sponsored content deal with Dell.

It marked the official launch of the NYT’s native ad platform and sparked a round of speculation that native advertising is going to be the hot new format of 2014. Dell gets sponsored posts and large format “editorial story ads” for its money.

Media pundits were astonished that such a venerable media title would hand its front page to a brand, and proclaimed the start of a new cash-cow for publishers, while other advertisers no doubt called their agencies for help.

Shortly after, the largest investment bank in the US, J.P. Morgan, released its annual Nothing but Net report, and claimed native advertising will usurp all other forms of promotional content, and even topple display ads.

"We believe native ads are quickly becoming the de facto ad format on mobile and increasingly moving into desktop,” the bank said. “We think native ads also have significantly higher click-through rates than traditional display ads, which leads to higher pricing over time."

However, others see challenges in the sheer profit margins that accrue from native ads. The editor of the annual PwC Australia annual media and entertainment outlook report, told AdNews there was a major problem with production costs.

"Native doesn't scale very easily," said Megan Brownlow. "The challenge with online advertising is keeping your margins healthy, so the challenge for native is scale and cost."

The scale question is clearly still being worked out, as is the production economics of running a native ad campaign.

Influential research firm Econsultancy also chimed in on the native ads debate, noting there was still confusion among brands and agencies about how to produce content and seed it across the web.

“If you are running a large campaign across multiple websites, many brands assume that each placement will require a unique piece of content, written to an exacting house-style guide,” the research firm said in a recent post.

“This rings alarm bells, confusion and to many brands and agencies sounds like far too much effort,” the research firm said.

”But the truth is that creating multiple unique pieces of content is not always necessary, providing that the content you are promoting is contextually relevant to the publisher and the consumers you are targeting,” Econsultancy said.

Publisher Fairfax is likely to reveal more about its approach at an IAB seminar on 31 January in Sydney, after unveiling its Brand Discover offering in September. The title of the presentation is: Advertorial Is Dead, Long Live Native Advertising, and is a direct pitch to get mass brand support.