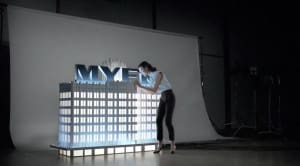 Despite a new chief at the helm, a substantial brand re-positioning and heavy in-store Christmas investments, beleaguered department store chain Myer has been unable to turnaround its fortunes and this morning posts a staggering 23% fall in net profits after tax.

Underlying costs increased 2.4%, which included a further $20 million investment in the business.

Myer has not detailed where that $20 million was invested, but it is thought that it was directed at its largest marketing push for a decade under the banner, ‘Find Wonderful’.

The extensive campaign ran across all media in the run-up to Christmas and was devised and executed by Clemenger BBDO Melbourne.

The investment also went towards the build across 37,000 square metres of floor space for the Christmas ‘Giftorium pop-ups,’ a new incentive to improve the in-store experience.

Despite these efforts, sales during the second-half of the 26 weeks, incorporating Christmas, were again up a marginal 2.5% to $1,072 million, a mere 1% increase on a comparable store sales basis.

Myer’s Stocktake sale was ahead of last year on a total and comparable store sales basis, however this was not sufficient to make up for the shortfall in sales earlier in the first half of the fiscal year.

The company blames a “highly competitive environment, together with the overall effect of a weaker Australian dollar” for the weak performance.

New CEO and managing director Richard Umbers, who took over in March after being promoted from chief information and supply chain officer, admits: “Overall it (the most recent strategy) did not deliver a business model able to respond to this new retail environment and we have lost relevance with some customers.”

He added, “Our new strategy to bring the love of shopping to life will be guided by a clear vision and a plan to win back market share, to respond faster to change and deliver a sustainable recovery in earnings.”

Finally, a proposed store at Greenhills in New South Wales will no longer proceed.