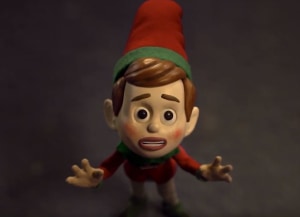 Elf goes on a journey

It’s a scenario everyone can recognise at Christmas - that each family has its own brand of nuts, but there’s nowhere you’d rather be.

Elf, getting frustrated with his chums, goes in search of another set of decorations to spend the holidays with. He meets various Christmas decor tribes; the giant street decorations, the hectic neon lights backed with tinny music, the standoffish Scandinavian decorations, and the home-made kids decorations.

None of them are quite right for Elf, so he makes his way back home to Reindeer, Mouse and Angel.

“You guys are nuts, but you're my kind of nuts,” he realises.

This year the department store has also created a children’s book based on the characters called ‘The completely and utterly, absolutely perfect Christmas, written and illustrated by H C Floren. It is complemented by virtual reality technology, which brings the characters to life using the Myer ‘Elf Vision’ app.

For the first time MCN is running the ad exclusively across its network for 24 hours before the ads run on any other network. It will roll out across Ten and Foxtel, catch up sites Tenplay, Foxtel Now and the Foxtel app as well as MCN Location, Qantas In-Flight, and MCN’s out of home network, from Sunday 12 November.

Myer executive general manager of brand and marketing, Michael Scott, says: “We’re excited to be breaking new ground with MCN to help share the Myer story in the lead up to Christmas. Myer makes shopping such a positive part of Christmas and we’re delighted to be the first brand to leverage MCN's network over a 24-hour period in such a fully integrated and impactful way."

The 90-second ad will run on TV and Qantas screens, with a 30-second edit for digital channels.

As part of the partnership, Myer will also have ownership of Christmas programming across the Lifestyle Channel, including a bespoke ‘Short Break’ activation. Breaks will be shortened to run a special 90-second film, which will include a 15-second billboard beforehand.

MCN national sales operations director, Ben Sumpter, says: “Christmas can be a challenging time for retailers, so working with our agency partner, Ikon, we created a strategy that would create cut-through in a highly-competitive period.

“As leaders in multi-platform campaigns we were therefore thrilled to deliver our long-term partner, Myer, our expansive network exclusively for 24 hours, for the first time in MCN history. It’s the ultimate use of the MCN network, demonstrates the extraordinary combination of assets and aims to strike a balance between emotional brand engagement and tactical activity.”

The ads were developed by Clemenger BBDO Melbourne and continues the creative direction that was introduced in 2015.

Myer is also unveiling its animated Christmas windows on Sunday and will again open its Giftorium and Santaland in-store activations.

Check out David Jones' festive ad this year. It tells the story of a gingerbread man making his way home for Christmas.