Most memorable ads of past decades 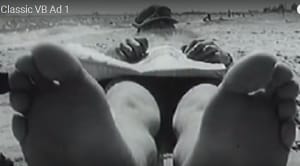 The most memorable ads of the past six decades have been picked and VB Bitter, a controversial ad that raised the profile of AIDs among heterosexuals but also provoked a backlash against gay men, Mortein fly spray, Yellow Pages and a chunk of lamb all made the cut, according to the Sydney Morning Herald.

Louie the fly, a figment of the imagination of young copywriter Bruce Courtenay, became a household name in the 1950s when he was used to illustrate the threat from disease spread by flies in an animated spot for Mortein, a spray spruiked as the answer to the problem.

Tired and thirsty from a long day of driving a tractor, playing footie, riding a horse, climbing a utility pole or digging a hole? This '50s ad proposed there was only one answer to your dilemma: a cold glass of VB. With rousing music that could've been the prelude to an epic Western, the ad said simply: "A hard-earned thirst needs a big cold beer and the best cold beer is ... Vic"

In the '70s, the subject matter turned far darker, with ad guru Siimon Reynolds creating a terrifying HIV/AIDS public awareness spot that one can only imagine inspired as many complaints as it did recognition for its memorableness.

In the 1990s Yellow Pages struck a chord with its ad demonstrating how the big yellow phone book could connect enthusiasts of even the most obscure things - including the rare Goggomobil.

It was AFL legend Sam Kekovich's deadpan bid to bolster Australians' commitment to not being 'unAustralian', along with all that this entails – including, apparently, a previously unheard-of tradition of eating lamb on Australia Day – that moved the nation in the 2000s, according to SMH.

Last week Unruly released its list of the most shared ads of 2015, with Android's furry animal filled spot not only topping the list for this year, but also for all time. Disney, Purina, Budweiser and Pandora also ranked highly.