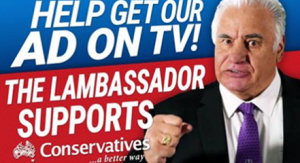 Media personality Sam Kekovich and senator Cory Bernardi are being grilled by Meat and Livestock Australia for using the term ‘Lambassador’ in political ads.

Kekovich fronted the infamous MLA Australia Day ads for a decade and the ex-sports star was very much known as the ‘Lambassador’, but MLA argues that it owns the intellectual property rights, according to a report in the SMH.

MLA finds issue with an ad shared by Bernardi that says ‘The Lambassador supports the Australian Conservatives” and pictures Kekovich.

MLA told Bernardi it would lead people to think MLA was endorsing Australian Conservatives, which it is forbidden from doing under its funding agreement with the government.

"This is an extremely serious matter," wrote MLA's general counsel Clare Stanwix, in a letter sent on Wednesday.

MLA is requesting the senator retracts his Facebook post and makes it clear that the use of the ‘Lambassador’ terminology was an error.

Bernardi told Fairfax Media that MLA did not own the ‘lambassador’ terminology and made no indication it would pull the ad.

He also signalled his intent to get the ad to run on TV, setting up a donation page to cover the costs.