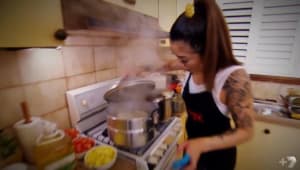 Three nights into the new ratings year and Seven's My Kitchen Rules is still the top rating show but continues to shed substantial audience figures on last year.

Part of MKR's decline can be attributed to the strength of rival shows. Nine's Married At First Sight is growing its audience in key demos and pulling far better numbers than last year's flop Australia's Got Talent. Ten's I'm A Celebrity is also up; last night's episode grew 13% on episode 4 last year.

Other explanations is that the MKR cast is not resonating with viewers as well as previous seasons or the format is starting to get a bit stale. Every reality TV format eventually needs refreshing or binning.

But it's only three nights into a long season, so any thoughts Seven's juggernaut is running out of steam are premature at best. MKR still dominates all key demos, consistently clocking metro audiences north of one million, and is a safe bet for advertisers.

What this drop does is provide rival networks with optimism that MKR is not the impenetrable ratings beast we have all become accustomed to. The heat in the Seven's ratings kitchen has just turned up a notch.