Metcash in marketing push to fend off grocery rivals 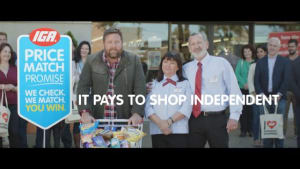 Wholesale grocer Metcash has launched its biggest ever advertising investment as it looks to take on supermarket rivals and reverse negative price perceptions of its IGA chain.

The marketing push, by recently appointed creative agency The Monkeys, was launched last night across free-to-air television, out of home print and online, and core to the strategy is a 45-second television commercial featuring Australian actor Shane Jacobson.

Metcash GM marketing Madeleine Fitzpatrick, who left McDonald's to take up the role last year, said the price match promise addresses the main barrier that consumers have when it comes to using IGA as their grocer of choice.

“There is tension. Customers love shopping at IGA but there is a barrier for people shopping with us more frequently or doing a full shop with us, which is about everyday pricing,” Fitzpatrick said.

“But they love our stores being independently and locally owned and they come to IGA for those brands they see disappearing from the biggest supermarket shelves. This is an opportunity for us to reset the IGA experience. This is the start of the journey. We recognise there is a lot more work to do.”

In other news for the company, Metcash announced this morning that it was selling its automotive division to Burson Group for $275 million as it looked to shore up its balance sheet following a loss in the year through to April.