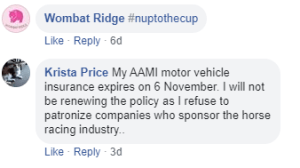 Melbourne Cup sponsors are facing backlash on social media as more people get behind the Nup to the Cup movement.

The hashtag NupToTheCup has been trending across Twitter, up against the Tabcorp’s sponsored hashtag MelbourneCup.

A spoof ad created by Juice Media calling out the industry has also gone viral across social media with more than 67,500 views on YouTube and 1,100 plus retweets on Twitter despite being pulled offline briefly.

People have also taken to the Facebook and Instagram pages of sponsors condemning over horse racing and animal cruelty.

Some of the sponsors’ comment sections appear to have been monitored heavily with zero comments on their posts, while others were filled with people calling out the brands.

The event’s main sponsor Lexus has been tagged across Twitter but its Instagram and Facebook pages have little engagement with only a handful of negative comments visible:

“I am in my third Lexus, but I tell you this. I will never purchase another one knowing that you continue to support the racing industry after the cruelty associated has been exposed. Shame on you Lexus.”

Network Ten, which has the broadcast rights to the race, has been called out for "glorifying the destruction of horses".

"I wonder how many horses will die for entertainment today."

"Horse Racing is cruel ! Shame on you."

"Let’s hope the horses are looked after..."

"Glorifying the destruction of horses."

"Let's find a more positive and humane reason to dress up."

“Wouldn't waste my money on betting and would never support the Race Horse Industry.”

“I don’t care about who wins, I care about what will happen to the one that doesn’t. They will be slaughtered for dog food because they’re no longer money makers.”

“Shame on this evil industry!!!Boycott!!!”

“Unfortunately most people like some of these poor horses wear blinkers and only see what is in front of them and that is entertainment and making money. If I had my way, all forms of so called entertainment and sports that uses and abuses animals would be banned. These include horse and harness racing, greyhound racing, circuses, rodeos, equestrian events, steeplechase (which is worse than horse racing in regards to percentage of injuries and deaths) and lastly the worst one, bull fighting.”

Myer has been a longtime sponsor of the Melbourne Cup Fashion on the Fields.

Some of the comments left on its Instagram included:

“Shame on you for still supporting and condoning abuse and exploitation of innocent animals. Wake up and realise #horseracingkills #boycottmyer.”

“@myer I hope your donating to foundations to support all the mistreated horses! shame on you for supporting horse racing.. Who will die this year.. perhaps we should bet on that..”

“Wish you cared about what happens to most of the horses after the race!!! Won’t be shopping at myer because of you supporting such a cruel event.”

Other sponsors such as AAMI, Furphy, G.H. Mumm and Bumble received similar comments on Facebook and Instagram from followers stating they wouldn’t do business with them anymore.

"My AAMI motor vehicle insurance expires on 6 November. I will not be renewing the policy as I refuse to patronize companies who sponsor the horse racing industry.."

"AAMI certainly won't be on my list of insurers in the future."

“Love your beer but will no longer drink it until you stop sponsoring horse racing.”

“I’d rather drink mumm without the horse association.”

“Your company should be ashamed that you are a sponsor of Australia’s cruelest blood sport.”

“@bumble_australia I really love Bumble, met an amazing man on the app, I love the messages of empowerment and kindness, but I just feel like this doesn't extend to investing so many dollars into the cup. It seems like the total opposite of Bumble's values and I'm sad to see it supported by such a progressive and amazing organisation.”

AdNews reached out to the Melbourne Cup’s major sponsors to see if they would pull out or condemn the event, however all maintained their support for it.

The horse racing industry has come under fire following an expose by the ABC which showed the brutal treatment of retired racehorses.