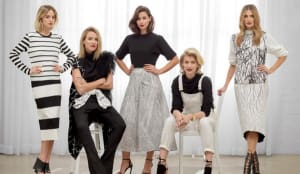 MCN is the latest to demonstrate the thinking with the second season of Fashion Bloggers, with its blogger teaming up with key brands to extend messaging beyond the TV screen and into the social media sphere.

“We know social influencers are hugely important in today's media mix, so whether those influencers are bloggers or celebrities, broadcasters or just operating in a digital native capacity...they have an influence,” Minogue said.

The show’s creator and producer, Core3 Entertainment, brought the bloggers and show concept to NBCU’s E!. MCN worked with NBCU and Core3 to connect the partner brands with the bloggers.

While Minogue played it coy on the revenue structure of the type of deals MCN had struck with the bloggers, she said interest from season one to two had picked up to the point where six brands are on board instead of four.

One of the key brands involved in this season's show is Holden, which is keen to leverage blogger Amanda Shadforth's social media network to help launch its new model, the Cascada.

Minogue said Shadforth would essentially act as a creative lead for the Cascada campaign.

“Shadforth will essentially become a creative director for the brand and create a campaign from scratch,” Minogue said, saying that brands were keen to secure the services of social media influencers involved in the show to secure their insight into the markets they were trying to reach.

“I think brands are tapping into the idea that these influencers have a lot of power in communicating the message to their target audience, and they've been doing it pretty well. The brand doesn't have to be front and centre in that...it's more of a subtle thing and I think brands are seeking that.”

Other brands on board for Fashion Bloggers this season include Schwarzkopf, Samsung, and Oral-B.

From a sales perspective, MCN said using social media influencers wasn't so much a revenue play, but was simply trying to gain traction in the brand integration market by offering a further point of difference.

“Our whole proposition in the market is about multiscreen solutions, so for us where the revenue falls is irrelevant as really what we do is create solutions for brands,” Minogue said.

“For us, it's not so much about where the revenue sits, as are we delivering the right message to our consumers in the most relevant environment?”

MCN also said it was looking at ways it could leverage the social media presence of other talent on its networks to help brands connect with their audiences, while AdNews understands that at least one other network is toying with the idea.

“I think there's always opportunities [to leverage talent], but it goes back to the talent and who the audience they're trying to reach is and how the brand relates to the audience,” Mingoue said, sounding a note of caution on trying for too much too soon.

“In today's environment it's important for both brands and influencers to be really aware of the implications of doing it wrong. If it's not genuine, it can go horribly wrong for talent.

“These are ideas we always think about, but it has to be the right solution for all parties involved.”