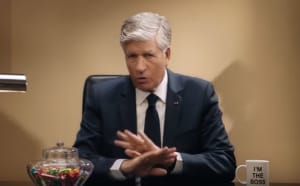 Maurice Levy has an “I’m the boss’ mug’, his safe is full of lolly jars, and his office has a revolving bookcase leading into a secret room – and, it’s available on Airbnb now.

The Publicis Groupe global CEO has a tradition of making a video (in French and in English) for the festive season to wish staff and clients well for the New Year. This time around, he’s playing on the speculation around who will occupy his office next year when he retires in May with the hashtag #WhatNext.

The question is, who will occupy the office next year? Well, if you ask this humble journalist, the answer is right there in front of you in the festive video. It’s speculated by many that Arthur Sadoun, current CEO of Publicis Communications, is the most likely candidate.

In the video, while recapping the year, Levy is casually drinking from an ‘I’m the boss’ mug that no one else is able to lift – a little like the Sword in The Sword in the Stone - The Legend of King Arthur.

Ring any bells, anyone? In the medieval myth, Arthur is the only one that can remove the sword Excalibur from the stone which proves he is the true king, the rightful heir and on his way to the Holy Grail.

Doesn’t get much clearer than that, does it. Bravo Mr Levy, Bravo.

Levy wishes everyone a New Year full of dream, and reveals that his office is already available to rent on Airbnb, which explains why removal men have been packing everything up around him. If you click on the link at the end, there is a genuine Airbnb listing offering one lucky and aspiring advertising leader the opportunity to spend 'a day in the life of Maurice Levy'.

OK, well it's basically a lot of being chauffeur driven around fancy places in Paris and hanging out in the Publicis offices - but they will fly the winner from anyhere in the world (even Australia). To enter, tell Airbnb what you would do with a day in the office of Maurice Levy by midnight Central Eastern Time on 22 December to be in with a chance. Obviously the most creative answer wins.

Levy was the successor to Publicis Groups original founder Marcel Bleustein-Blanchet making him only the second person the run the group since it began in 1926. He has been chairman and CEO since 1987.