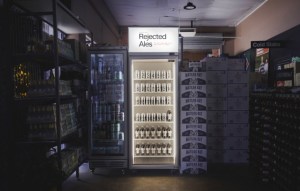 Matilda Bay has launched Rejected Ales, a limited-edition collection of the 27 near perfect brews they rejected on the way to crafting the award-winning Original Ale.

“We’ve crafted beer to perfection our own way since 1983. If a batch doesn’t meet our impeccably high standards, we reject it. It might be a bit commercially reckless, but it’s just the way we do things around here. So, to demonstrate our dedication to crafting the perfect beer, we’re letting Aussies try our not quite perfect enough Rejected Ale”, says Matilda Bay’s founder and master brewer, Phil Sexton.

With names like ``Yeah…nah”, “Keep dreaming” and “Ballpark”, each of the 27 rejected ale cans tells a story of its rejection. The campaign has been brought to life in OOH, radio, press, social, DM, retailer integration, and in store activations. It’s Matilda Bay’s first above the line campaign in more than eight years.

Howatson+Company executive creative director, Gavin Chimes: “They say nothing tastes as sweet as success, but at Matilda Bay, failure is delicious too. Now we’ve put that failure in cans for people to try.”

The TVC is HERE