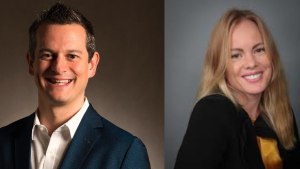 Scott Spirit will join the business from artificial intelligence business Eureka AI. Prior to this, he had worked under Sorrell at WPP, as the holding group's chief strategy and digital officer.

During his 15 years with the business, Spirit was also a director of Nairobi-listed WPP-Scangroup and prior to his time at WPP he worked at Deloitte and Associated Newspapers.

As part of the new role, Spirit will also join the company's board as a director.

Elizabeth Buchanan will also join the board as a non-executive director on 12 July 2019. She has previously sat on the boards of Because Brand Experience and The Luke Batty Foundation in Australia and is currently a Non-Executive Director at Vital Voices Global Partnership.

Buchanan has 25 years’ experience in technology, marketing and advertising including founding her own full-service digital ad agency, The White Agency, and holding senior roles at WPP in Australia, OMD Worldwide and most recently mar-tech innovator Rokt.

Sorrell says he is delighted to reunite with Scott and to welcome him and Elizabeth to the team.

"I know that Scott’s proven knowledge of global markets will be invaluable as we continue to expand the business technologically and internationally," Sorrell says.

"Elizabeth has rare global experience at the forefront of innovation in the industry and that makes her an obvious choice for a disruptive, purely digital business like S4 Capital.”

Buchanan says the pace of disruption is only increasing, causing a "seismic shift" in businesses models and go-to-market strategies.

She says "significant competitive advantage" is being found in data and smarter customer interactions.

"To thrive in this environment, clients need a new kind of partner, one that has been designed from the core to be agile, diverse and focused," Buchanan says.

"Ultimately this delivers better services, faster and cheaper. S4 Capital is building this new era marketing services company and I’m thrilled to be part of it.”

S4 Capital has continued to expand the capabilities of its creative digital content production company MediaMonks and its programmatic consultancy MightyHive, in recent months.

Earlier this year, MediaMonks purchased food and liquids film studio Caramel Pictures, based in Amsterdam, for an undisclosed cash sum.

Late last year Sorrell and S4 continued their acquisition run, adding Mighty Hive, to its ranks for US$150 million.

Sorrell launched S4 Capital in early 2018 after a public exit from WPP amid claims of personal misconduct and misuse of company assets.

Despite Sorrell denying the allegations, he ended his 33-year tenure as boss and founder of the world’s largest advertising and PR group in April 2018.