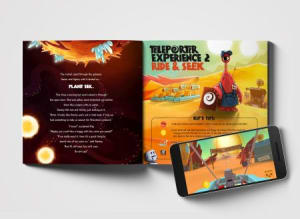 It partnered with children’s author Ursula Dubosarsky to develop a physical book, which tells the story of Sammy the Koala’s journey into space. The book comes with a Google Cardboard VR headset kit, ‘The Teleporter’, which makes the book interactive.

Much like a technology enabled ‘choose your own adventure’ book, the story is designed to encourage children to make good decisions with money, by learning the difference between ‘wants’ and ‘needs’ and how best to spend money.

The story sees Sammy the Space Koala travelling to different planets with a robot to find a present for her adventurer grandmother. She has coins to spend within the game and has to decide which items to buy to help her on her trip, such as deciding between a space suit or a soccer ball.

The story then teaches kids whether those decisions were good or bad financial decisions.

“VR is everywhere at the moment, but the reason that VR is relevant is because it becomes an active decision-making tool – if you’re just reading the book you can’t choose the items you buy. It’s hard to do that in a passive medium but VR turned it into immersive storytelling.”

A 30-second video ad is also launching to promote the initiative and tie it into the overarching CommBank Can platform with the line: “Can your bank take financial education to the next dimension? CommBank Can.”

The bank has developed around 80,000 of the headsets and is distributing them to schools for the launch phase.

The ambition, according to Canning, is to roll it out at scale following the initial pilot run and the hope is that it could develop into a series of storybooks and become a mass market product as widely recognised as CommBank’s Dollar Mites.

The VR experience was developed by M&C Saatchi’s in-house innovation lab Tricky Jigsaw and the book was illustrated by Fin Design. The project was developed over the last three months, which Canning says makes it a relatively fast project.

CommBank has dabbled with VR technology before. Its HR division has used VR for a programme to show new staffers what it’s like to work at CommBank, but this is the first time it has been used for Start Smart.

Ahead of the launch, Stuart Tucker, GM of brand, sponsorship and marketing operations at CommBank, told AdNews the VR element of the educational push is more than a gimmick. CommBank has been running the Start Smart programme since 2007, predominately through the curriculum and lessons in schools, but it hopes that this initiative can expand it and make it more accessible to more families and remote communities in particular.

The bank’s research found that 10% of 15-year-olds don’t even have a base level of financial literacy and it has an overarching aim to drive positive change and help teach lessons that translate into money management decisions later in life.

Tucker also added that one parent who experienced it during trial stages said their child learned more in a 10-minute VR trip to another planet that they have in five years on Earth.

While the objective is to combine fun with learning, not to sign up new customers, it is part of a long-term strategy to ingrain the bank in people’s lives.

It’s not the first time that a storybook has been core to a brand’s campaign. Last year, Saatchi & Saatchi was widely recognised and awarded for its creation of Penny the Pirate, a storybook for OPSM to help parents test their children’s eyesight.

If you missed it, check out the Penny the Pirate video here: