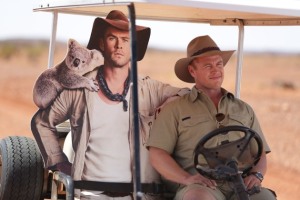 Tourism Australia is back with the second installment of its hugely popular Dundee campaign, only this time it is created by independent agency Thinkerbell.

The first Dundee ad for the Super Bowl featured Aussie Hollywood stars Chris Hemsworth and Margot Robbie in a ‘movie’ and was an immediate success.

The Super Bowl ad was created by Droga5 New York, but locally Clemenger Melbourne is Tourism Australia’s agency of record.

This time Thinkerbell is taking viewers on a tour of the ‘film set’ and has enlisted the last of the Hemsworth brothers, Luke Hemsworth, as the tour guide for the $8 million ad.

The campaign is the next phase of Tourism Australia's $36 million push to attract more American tourists to Australia.

“Casting Luke was a no brainer, rounding out a ‘hat-trick of Hemsworths’ after having cast his brothers Chris and Liam in the original ad,” Ronson says.

“The brothers truly are three genuine Australians who perfectly epitomise the easy going, sense of fun that we know is such a big part of our country's international appeal.”

While Thinkerbell is leading this campaign, Tourism Australia is in the midst of a creative pitch with an announcement expected in coming weeks.

"Leveraging some of the best work Tourism Australia has ever done has been quite an honour,” Thinkerbell founder and creative director Jim Ingram says.

“We know Dundee the movie never quite happened, but we'd still love people to come and visit the amazing set we built for it."

Since the campaign launched, there has been a 22% increase in American tourists traveling to Hamilton Island, which Tourism Australia managing director John O'Sullivan said is a credit to the Dundee campaign, as well as Australia's dropping dollar.