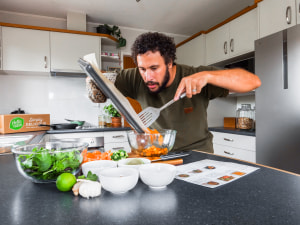 Kiwi YouTube star Jordan Watson, also known as How to Dad, in the Hello Fresh NZ campaign by Emotive.

This first appeared in the July/August edition of AdNews. We know the industry is facing some of its biggest challenges at the moment, so to give you the latest insights, and something to unwind with, we’re making the digital magazine free during this crisis. Click here to access your copy.

Agility. It’s one of adland’s favourite buzzwords, yet how much it was practiced across the industry prior to the COVID-19 pandemic is probably not as much as it was preached.

If anything, 2020 has been the year that put agile working to the test as the pandemic’s unprecedented and ever-evolving nature left many campaign messages quickly irrelevant and plans for big, lavish shoots overseas thrown out the window with travel bans imposed.

That was the experience for independent Sydney-based creative agency Emotive and a number of its clients. With the cancellation of the Tokyo 2020 Olympics, the agency lost a number of campaigns.

Despite the losses, Emotive group creative director Ben Clare says the agency was able to use its size and independence to its advantage.

“Being small and nimble is actually a huge benefit in times of disruption,” he says. “It means that we can react pretty quickly.”

And quickly they did. At the time the lockdowns started to take place, the agency had a campaign for audiobook platform Audible out in market that touted the benefits of being able to listen to books on the go.

“Pretty much everywhere where you weren’t supposed to be with the new restrictions in place,” he says.

“We needed to adapt the messaging because all of a sudden we’ve got an ad out in market that just simply didn’t make sense. Lucky for us, we often create longer form edits designed for social.

“There was enough footage there, we could quite easily cut together a more appropriate edit for Audible.”

Production pivots
In the wake of COVID-19, creatives and production companies have had to shift the way they work. Big shoots with lots of people are no longer viable as social distancing and health and safety guidelines become paramount to curbing the spread of coronavirus.

Instead, the industry has seen everything from a rise in animation and stop motion to campaigns shot entirely across a video call.

Production company Photoplay says while there was a partial shutdown in place and it saw a rise in animation campaigns, a number of its clients were still hoping to go ahead with shoots.

Oliver Lawrance, executive producer at Photoplay, says this just meant introducing new protocols on set - something the Commercial Producers Council has been drafting up for the industry.

“It was really about having safe practices on set to make sure all our crew weren’t in any danger, keeping crews as small as possible and [social] distancing,” Lawrance says.

Staggering crew and having clients live stream into the shoot instead of physically being there are some of the ways Photoplay has been doing this.

“We did three shoots in the last month and on two of those the client and agency didn’t come,” he says.

“They just watched the live stream of the camera and called up with any notes or feedback if they wanted any other shots done.”

Across the globe, many are looking to the Australian and New Zealand production industries as both nations slowly come out of the pandemic. Lawrance says team has been receiving numerous requests to do jobs for US clients.

To help clients navigate the restrictions taking place around the world, global creative platform Genero has pulled together data from 80 markets it works in to build a Global Production Status Map to help guide brands and the industry on the rules in place for each location. There are four different statuses, starting with post-production services like animation, augmented reality (AR) and editing, which can easily be supported remotely, through to full-scale live action shoots with some light safety measures and precautions in place.

Genero CEO and co-founder Mick Entwistle says the data is collected through a regular survey of the platform’s global network of creatives and then verified against key news and government sources.

“As things have started to open up, one of the biggest challenges has been finding innovative ways to adhere to the safety restrictions,” Entwistle says.

“The biggest initial opportunity was for post-production services like animation, editing, motion design and AR which could still take place safely from home. However, we’ve also helped clients source teams in safe markets to shoot live productions that couldn’t go ahead locally.

“We’ve also seen an increase in live streaming in an effort for brands to capture a very attentive digital audience.”

Unprecedented solutions
One brand who has tapped successfully into this audience is Tourism Australia. With travel restrictions imposed both locally and globally, the tourism body needed to find a way to remain top of mind.

Tourism Australia chief marketing officer Susan Coghill says the organisation did some research and found that among all the negative news, Australians were craving hope and a sense of optimism.

More than 60% of those spoken to by Tourism Australia said they would be keen to travel domestically once restrictions began to ease, which Coghill says presented a huge opportunity. From here, Live From Aus, was born.

“As we’ve had to do in so many other aspects of our business, adversity forced us to pivot. Underpinning the success of Live From Aus has been the ability to tap into our country’s incredible network of tourism industry operators and our own network of talented Friends of Australia ambassadors, who could manage live streaming independently and become first-hand content creators for us.”

For the entire weekend of May 16 and 17, Tourism Australia went live across Facebook and YouTube with exclusive travel experiences, broadcasting on the hour, every hour, to an audience of 17.8 million across 40 different countries.

The program of live events included a dance party with The Wiggles, iconic workouts in Byron Bay, close crocodile encounters with the Outback Wrangler Matt Wright, pro golfing lessons and dinner with Matt Moran and friends.

But getting it to all run seamlessly required an immense amount of work. Tourism Australia collaborated with its agencies M&C Saatchi, Digitas, UM and OPR to bring the whole thing to life in the space of a month. 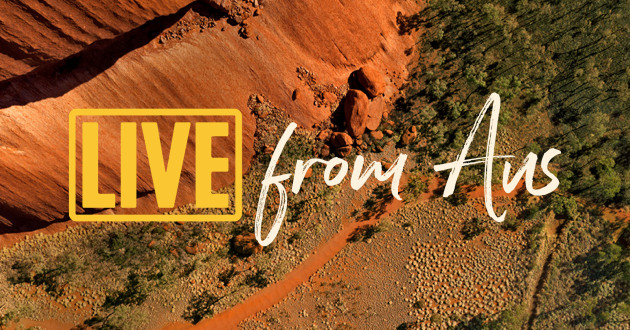 Digitas creative director Simon Brock says it was like running a news broadcast, reality TV show and digital campaign all at once.

“Those live streams had to be choreographed,” Brock says. “We couldn’t have 32 different groups of people all running Australia’s social channels all at the same time because you would get bounced out from each other.”

To ensure it ran without a glitch, Brock says there were run throughs happening over three days and technology built to help the broadcasts go live across both Facebook and YouTube. Unable to send crew to physically be there, they had to test for internet quality and in some cases the best headphones to block out wind so that the person talking could be heard crystal clear.

“It was probably the most collaborative campaign I have worked on in a long time,” Brock says.

Between Tourism Australia and the agencies, daily conversations were had to make sure it all came together perfectly. Brock says it meant that all the agencies had to work with their silos down.

“Applying things like agile methodology to multiple agency collaborations is a tough thing to try to figure out,” he says.

“We did it here because it was a necessity but I’m sure we’re going to continue doing that because it’s a really effective way of working.”

Much like Tourism Australia and its agencies, subscription meal delivery service HelloFresh and Emotive had to direct talent from afar.

Following the success of its Skewered content series with comedian Celeste Barber, HelloFresh wanted to create a similar localised series for New Zealand. Kiwi YouTube star Jordan Watson, also known as How to Dad, was enlisted for it.

Clare says the Emotive and HelloFresh teams were ready to fly over to shoot the series when the travel restrictions hit.

“We were very fortunate that Jordan himself is a content creator,” Clare says. “He does have that capability to film himself but we had to rewrite the script accordingly to reference and acknowledge [the new restrictions].

“That was a challenge in itself because when you’re creating content films or a cooking show segment that is six minutes long that features not only Jordan but a celebrity guest, the scripts are pretty long. They’re a lot more involved and there’s a hell of a lot more components than your traditional 30-second script.”

Despite the problems provided by the physical distance, Clare says the team pulled it off.

Talent trends
Sourcing and directing talent who aren’t seasoned content creators was a challenge. Clare notes that for one client, the talent they need sits within the 85 to 90 age range - most of whom are unlikely to be tech savvy enough to jump on a video call or be on the books of casting agents.

At Genero, Entwistle says they worked with talent who may be related or from the same house. For a number of brands like Airtasker, using their own people has been a solution.

Airtasker brand lead Sarah May says the online marketplace which allows people to outsource tasks wasn’t initially planning a campaign but after a few conversations with various “taskers”, the company wanted to spread a positive message.

Shot and directed entirely through video calls with the help of creative agency Two Mad Cowboys, May says every person was a real life tasker.

“We really wanted to show this human side and how everyday Australians are feeling at home with the reality of those partner, kid and housemate walk-ins invariably happening during the shoot,” May says.

“We were really cognizant of showing the reality and landing that positive message, which is we will bounce back strong together.” 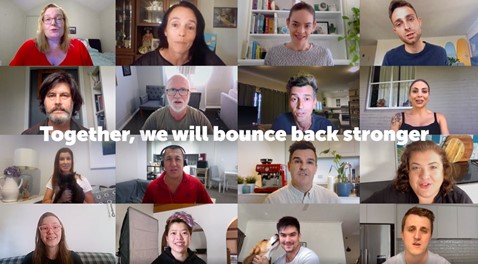 While questions were crafted and asked to each of the taskers, May says the answers were all unscripted. The biggest challenge though, was getting them to look at the green dot on their webcam.

“They’re our taskers, it’s not their day job to talk to the camera,” she says.

Overall, she says the brand isn’t opposed to using real taskers again but it is unlikely that it will shoot another TVC entirely on video conferencing.

Likewise, Brock admits that if pre-recording all of Live From Aus was possible, the team probably would have done it.

“We probably would have really struggled to convince ourselves and everyone else of doing an all weekend live stream with 32 different streams across the entire country if the option of ‘why don’t we just pre-record it all’ [was possible],” he says.

“If that was an option, we might have gone for it because that’s the world we know. But because it wasn’t an option, we were forced to try something new.”

Following the weekend’s success, Tourism Australia has held more live streams on its channels. Brock says it has all been about timeliness.

“I think the timing was right that Tourism Australia was one of the first to get there and create incredible content,” he says.