Little guys to get a look in on V8 action: MCN 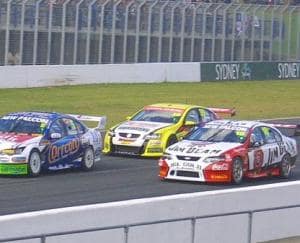 When the V8 Supercar coverage switches to Fox Sports next year, there'll be a lot more opportunity for 'smaller brands' to get in on the high-octane fun.

iN 2015 Fox Sports will broadcast the V8 Supercars series, with every practice session, every qualifying session, and race live on the pay-TV player, with Network Ten picking up the rights for six races.

With Fox Sports ramping up its coverage, advertising arm MCN is busy trying to work out how just to attack all the extra V8 inventory it has at its disposal.

MCN CEO Anthony Fitzgerald told AdNews that while it was working through “premium multi-screen broadcast sponsorships” for next season, the real gains will be made through the little guys.

“Because we're covering every race live and all practice rounds and qualifying sessions, that gives us an enormous amount of additional programming and advertising real estate that the V8s in previous broadcast deals had been unable to deliver,” Fitzgerald said.

He said while big advertisers were more than welcome to get involved with those opportunities, it said the real opportunity would be for smaller advertisers who had been involved in the V8's before, but didn't necessarily have the muscle to fork out for full broadcast spots.

“We're looking at advertisers that are involved with V8s at the on-ground level and even at the car sponsorship level, that historically haven't been able to be involved on the broadcast side of things,” Fitzgerald said.

While Fitzgerald said he couldn't get into specifics, but he said there were opportunities during the “down time” between races.

“On the Thursday or the Friday on a race meet there's the qualifying races and touring and then during the qualifying there might be 20 or 30 minutes of downtime where we can take the cameras into pit lane,” Fitzgerald said.

“We can get a look at understanding the cars, the drivers, the products that they use which is a great opportunity to highlight those sponsors that are track-side, but haven't historically been involved in the broadcast.”

He said while much of the brand integration during races was actually handled by V8 Supercars itself, that there could be opportunities for integration into “what's behind the red button”.

“We'll definitely be talking to advertisers about that.”

V8 Supercars gets a makeover