Let us entertain you - NRL 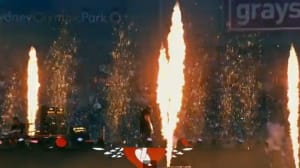 Launched at a function at the Sydney Opera House today, the ad features the fans of the game and the excitement generated by the product, with Robbie Williams' Let Me Entertain You as the backing track.

It’s part of a marketing strategy to demonstrate how the Premiership unites and captivates people, at every level, in the spectacle and entertainment of rugby league.

“It was quicker than they normally do,” Chess said.

“We were later with strategy than we would normally be, we wanted to make sure we got it right ... and the result you see there is a culmination of about three months of work from conception to today.”

However, the ad is just the start of things for the MJW-NRL partnership.

“I think probably what we've tried to do this year that hasn't been as clear in previous years is to take a two-pronged approach. Firstly doing the launch campaign but also doing a lot of strategy around the NRL in general,” Chess said.