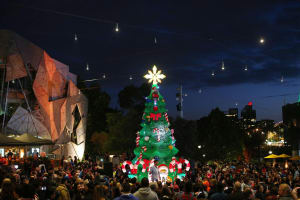 Lego is building on its strategy of getting “bricks in hand” by bringing its giant Lego Christmas tree to Melbourne as it shifts its focus to getting families to build together.

This year, the toy maker has brought its 10 metre tall Lego Tree to Melbourne's Federation Square as an extension of its 'Build Your Lego Christmas' platform, unveiled in 2014.

While the tree is the star of the show, marketing director Troy Taylor told AdNews that this year's execution will be a more integrated push as it takes its festive campaign in a new direction.

“Last year we inspired creativity through Lego and highlighted the priorities of Lego. It's a unique product because it's one of the only toys in the market that grows with the child,” Taylor said.

“But this year it's a more an integrated campaign. One of the learnings from last year was that we wanted to create more family traditions around building.”

For its second year, Lego has revamped its giant tree, making “the star the hero”, with a custom-built tree topper designed by Lego master builder Chris Steininger and his family. The star is made out of 13,195 Lego bricks and 3456 LED lights.

Taylor said the Lego tree has also been “Aussified” this year, with playful kookaburras, elves playing cricket and the return of Santa with a surfboard.

“We've taken what we did last year in Sydney with the tree and added elements to it to make it something different,” Taylor said.

“But the star is the hero of the tree and takes it to the next level.”

Surrounding the launch of the tree is an integrated campaign – with activations, social media and TV – which Taylor said builds on the learnings from last year's Christmas launch.

To get families involved in its television commercial, Lego launched a competition in November to see families submit their own Lego tree topper which could be featured in its Christmas commerical. Over the month of December, four families will see their home-made star top the tree in the Lego TV ad.

In addition, Lego is launching a number of “make and take” events, encouraging families to build ornaments which they can use to decorate their own Christmas trees.

“It was real risk last year but it really paid off,” Taylor said. “This year, the whole point of the campaign is to create a new Christmas ritual with families.”