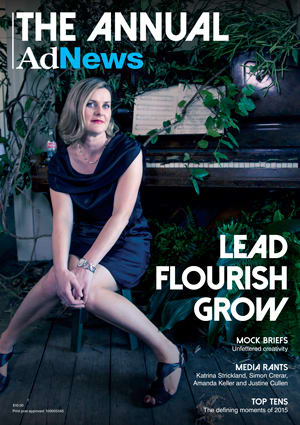 The 2015 AdNews Annual is out. This time it's about leadership. It features brands as diverse as Uber and Airbnb, Cadbury, Vodafone and Coca-Cola and media's new leaders from MediaCom, Zenithoptimedia and ARN. Copies will be landing on desks over the next few days and we'll be sharing some of the insights online too. You can also buy the iPad version immediately and check it out digitally.

When you look back over the last year in media, marketing and advertising, something that jumps out is the level of turnover in top leadership positions across media agencies and owners. It's unprecedented. There is a whole new generation of business leaders who have risen to the top of the industry as stalwart figures such as John Steedman, Henry Tajer and John Sintras from the agency world, and those from media owners such as Ten's Hamish McLennan and NewsCorp's Julian Clarke, have stepped aside. Some to retire, others have moved overseas. Whatever the reason, it's like a changing of the guard.

Within the agency scene it's almost easier to count on one hand the number of CEOs who have been in their role for more than two years. There are new CEOs across three of GroupM's four agencies and, at the time of publishing, an empty CEO spot at group level (although this could change between the time I write it and you read it). MediaCom's new CEO Sean Seamer potentially has one of the toughest years ahead of any of the agency CEOs – he choose The Annual as one of the first of very few official media outings since starting two months ago.

At Publicis there are new heads in Starcom Sydney and ZenithOptimedia. IPG Mediabrands has new leadership teams in place at four of its agencies and at the group level. There are new CEOs and chairmen across many of the major media owners such as NewsCorp, Southern Cross Austereo and Network Ten. There's a new MD at Facebook.

This changing of the guard is not just new people in new roles. It's a wholesale shift in who is running things, the visions being followed and the directions they will take in their businesses. With issues like media reform, agency transparency, and an exhilarating pace of change, these new leaders are challenged from day one and need to embrace and create a new dynamic.

What it means to be a leader in this landscape is so far removed from what was known and comfortable in the not-so-distant past. They can't just do what their predecessor did. So it seemed apt to take leadership as the jump-off point for this year's Photo Essay and even more apt to shoot it in a living house, where plants are thriving and growing, fighting for sunlight and the whole place is evolving and changing on a daily basis.

A huge thank you to Pernod Ricard who let us loose in Stoneleigh No. 50 for the the shoot, and thanks to the CEOs and CMOs who took time out to get dressed up to the nines and have a little fun with us on the project.

We've got a cross-section of those new agency and media bosses and marketing and business leaders from across established brands like Coca-Cola and Cadbury that have been around hundreds of years but are having to reinvent, innovate and evolve their leadership and brands alongside the challenger brands like Uber and Airbnb, which are shaking up the status quo and turning the establishment on its head.

These new challengers – the taxi firm that owns no cars, the hotel chain that owns no property, the content platforms that create no content – are disrupting the landscape and as such are a thorn in the side of established business but they’re also forging a new path that everyone wants a slice of.

That disruption is necessary for progress. It's the creative destruction of what was once accepted that will help business flourish and grow. It doesn't mean casting aside everything we've learned until now and blindly accepting the new world though.

Flip to Media Rants for smart words from content creators like Buzzfeed Australia editor Simon Crerer, New Matilda's Chris Graham, and Elle's Justine Cullen on the new world order as they see it. Our Top Tens take a look at those influential moments that have defined 2015, and in Mock Briefs, we see some creative concepts from agencies unfettered by a client brief. Thanks to all for being part of The Annual. The industry has kept us on our toes in 2015 and will again next year, so read on, there's smart words and smart creative inside. Enjoy the break, we'll see you in 2016.

On the Cover: An innovation junkie, Lisa Winn is the marketing director for Coca-Cola South Pacific. Her role is to make sure the iconic brand focuses its ‘constructive discontent’ on turning decades of experience and brand momentum toward the future, playing challenger brands at their own game.

We shot The Annual this year at Pernod Ricard’s Living House ‘Stoneleigh 50’ in Sydney. The house, an experiential and social activation for the wine brand, was created and developed by IPG Mediabrands agency Society and production agency The Feds. It was alive and flourishing in the real world and social media via #Stoneleigh50 for six weeks – thanks for your hospitality.

Here's the full list of talent included in the issue:

Agencies that took the time out to have some fun with mock briefs are:

Grab a copy on in print or on iPad. Extra copies of the AdNews Annual can be ordered from the publishers, Yaffa Publishing Group. Call 1800 807 760.