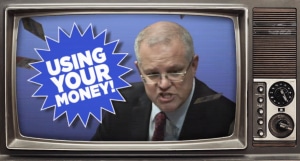 The Labor party has revealed its first ad campaign ahead of the federal election, and created a spoof video taking a swipe at the government’s use of taxpayer-funded ads.

The first official campaign ad, A Fair Go for Australia, focuses on its key policies around health, wages, climate change and tax.

It’s reportedly set to debut tonight across TV, but has already been splashed across the party’s social media, including Twitter and Facebook.


Alongside the campaign, the Labor party also released a video taking aim at the government’s use of taxpayer-funded ads.

This week, Nielsen figures showed that the Liberal party halted all ads across TV, radio and print.

Despite being grilled by the Opposition, the government refused to reveal how much it’s spent on advertising, but Labor estimates its 600,000 a day.

However, the biggest spender so far looks to be Clive Palmer’s United Australia Party, with Nielsen revealing he’s thrown $28.5 million into ads since September.