KitKat social campaign asks Australians to Pause, Have a Break and ask R U OK? 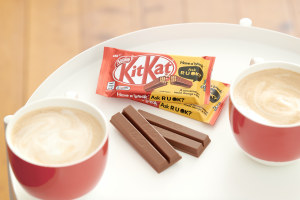 KitKat has launched a social-led campaign which asks Australians to Pause, Have a Break and ask R U OK? as part of its ongoing partnership with Australian suicide prevention charity R U OK?.

As the official Chit Chat partner for the organisation, KitKat has kicked off the conversation with a campaign which connects Aussie stars including Samantha Jade, Dom Thomas, Jarrod Woodgate and Suzan Mutesi, with their direct communities.

In the lead up to the charity’s national awareness day September 10, individuals were being tagged and asked to show their support by creating a universal ‘pause’ sign using two KitKat fingers side by side.

The image symbolises the importance of taking a pause and having a break to ask others R U OK?.

Sharing their snaps across Instagram, Facebook and TikTok, the group of personalities are extending the conversation by calling on Aussies to get involved and check in on friends, family and colleagues.

In the content, Mills encourages viewers to make their "chit chat have an impact" and ask, listen and encourage action.

Nestlé head of marketing confectionary Joyce Tan says the campaign aims to drive awareness about the significance of taking a break to speak to someone who might be struggling.

“2020 has been a challenging year for Australians, making it more important than ever to not just start but continue conversations relating to mental health," Tan says.

“KitKat is a proud partner of R U OK?, and we want to encourage everyone to take a pause, have a break and have a chit-chat with their loved ones this R U OK? Day. We’re hopeful that our campaign, supported by some much-loved and familiar Aussie faces, will empower more people to start a meaningful conversation that could change a life."

To further support the partnership, limited edition KitKat wrappers will carry R U OK? labelling and can be found in Woolworths and Coles nationwide.

People can get involved by using two KitKat fingers to create a universal pause sign and share their image on social media with the hashtags #KitKatPause #RUOKBreak.